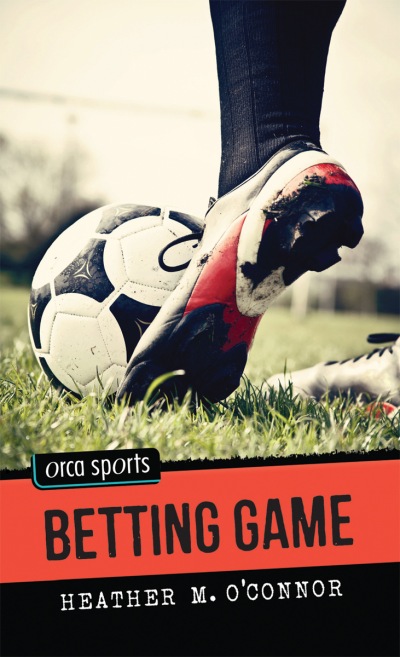 Jack’s a star player on an elite soccer team along with his brother, Alex. The Lancers are on top of the league, even favored to win the National Championship. But the game’s about to change. A slick bookie wins Jack’s friendship and introduces him to illegal betting. Before long, Jack is hooked on the adrenaline rush, and early wins convince him that gambling could make him rich. Meanwhile, an ever-widening rift is forming between the two brothers. Suddenly, Jack’s “system” fails and his luck runs out. How could a few losses pile up to a gut-kicking ten grand? When he can’t pay, the bookie gives Jack one way out—throw the National Championship. But can he betray his brother, his team and himself?
"O’Connor will keep the game’s fans close with plenty of in-the-know soccer patter, but she will also draw other readers with the story of Jack’s slow absorption into a gambling...Hard-hitting...and as memorable as a prison tour for young men who think crime is a sport and a joke."
– Kirkus Reviews
"The fast-paced writing has enough soccer action to keep reluctant readers turning the pages, and the gambling intrigue, along with a side plot involving a new player on Jack’s team, adds to the increasing conflict...The tone, dialogue, and emotional stakes ring true. A solid pick for hi-lo sports fiction."
– Booklist
"Tight and authentic sports action combined with engaging characters make this title great for sports fans as well as readers who enjoy action and drama."
– School Library Journal
"A very compelling story with interesting characters that kept this reader wanting to read more. 'Connor deals with topics that would be well worth discussing with almost any teen: the value of team-work; honesty; and ethics. I will certainly include Betting Game in our curriculum resource collection and would recommend it for other school libraries as well. Highly Recommended."
– CM Magazine
"A fast paced, entertaining read that will really appeal to all soccer players, both boys and girls, especially those struggling to sustain a reading habit. This book can’t be put down. The soccer scenes are action packed. The boys’ references to world renowned soccer players will engage readers while the emotional pressure to get along on a team will resonate with all athletes."
– Resource Links
CCBC Best Books for Kids & Teens   | 2016  |  Commended