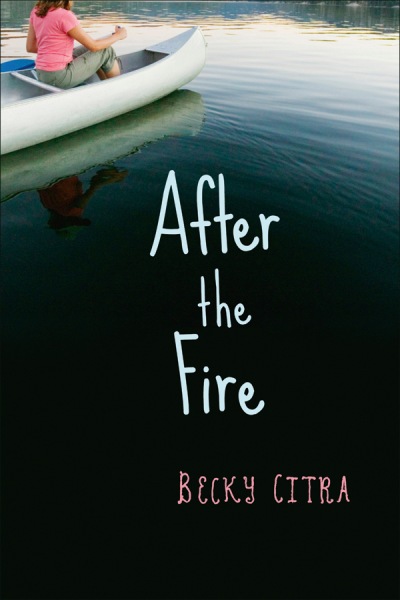 Melissa is waiting for the "new life" that her mother Sharlene has promised her since a fire devastated their family. But nothing ever seems to change. Melissa has difficulty making friends at school, they never have enough money and her little brother Cody is a brat. When Sharlene announces that they will be spending the month of August at a remote cabin on a wilderness lake, Melissa is less than thrilled. But there is more to do at the lake than she expected, and she is surprised to learn that her mother knows how to paddle a canoe, fish and make bannock and s'mores. On an island in the middle of the lake, Melissa meets Alice, a strange girl who is writing a fantasy novel. Alice shares her tree fort on the island with Melissa, and while at first Melissa is attracted to Alice's strong personality and her stories of her "perfect family," she becomes increasingly uneasy around Alice. As Melissa's relationship with her mother improves and her confidence increases, she is able to hold her own with Alice and start to appreciate her own imperfect family.
"Citra delivers a poignant, well-paced story about family and friendship…A delicious summer read...The book wraps with a satisfying and hopeful ending that affirms the human capability to persist and succeed through the hardships and difficulties that life may present. The book is an engaging story - an ideal recommendation for girls looking to read through the long summer nights. Highly Recommended."
– CM Magazine
"A thoughtful story about the healing power of the Canadian woods."
– Victoria Times-Colonist
"Citra has produced yet another winning novel for young readers that is engaging, interesting and full of true to life situations."
– Quill & Quire
"Melissa's angry resistance to her mom, and to her own memory, shakes up the familiar scenario of a kid trapped with an abusive adult, and readers will be caught by the realism of her first-person narrative…Along with Melissa's loneliness, there is always the beauty of the solitary setting and the truths she finds in the silence as she looks at the stars above the cliffs."
– Booklist Online
"Citra captures the tenuous feelings of manipulation and trust, longing and belonging, that Melissa, like other preteens, experiences…I recommend this book to students looking for a mature glimpse at a preteen's life, without the gauze of a quick fix or fairy tale ending."
– VOYA
"From the opening pages of After the Fire readers are intimately absorbed into eleven-year-old Melissa's world...In this unique and delicately written story of rebuilding, the parent-child relationship is explored in its complexity and the reader, like Melissa, is left feeling that families can heal and trust can be regained."
– Resource Links
"Citra's story moves along quickly, and engages the reader at every step. Melissa isn't perfect, which makes her a realistic and sympathetic protagonist...Citra keeps the reader guessing throughout the book, building suspense about Melissa's past, Alice's present and the girls' future. The story is dark while remaining grounded in reality. The scenes build as characters reveal bits and pieces of the puzzle, making the conclusion of the story wholly satisfying and surprising. After the Fire>/em> is a very satisfying read with an engaging plot and fully realized characters. Girls aged nine and up will relate to the characters and their frustrations, and the language level is easy to navigate. This novel is highly recommended."
– www.keenreaders.org
Resource Links "The Year's Best"   | 2010  |  Commended
Red Cedar Book Award   | 2011  |  Winner
CCBC Best Books starred selection   | 2011  |  Commended
Bank Street College of Education Best Children's Books of the Year   | 2011  |  Commended