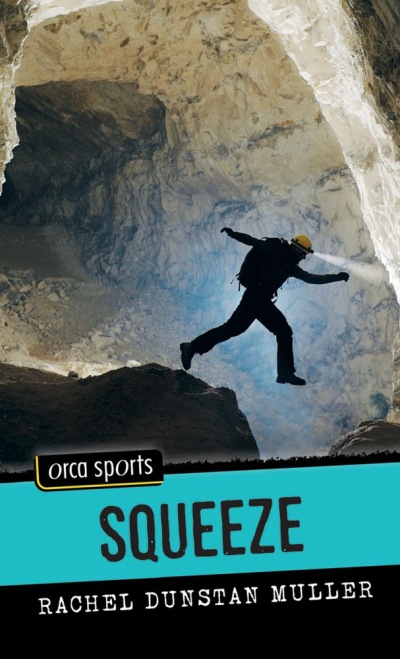 Byron is psyched when his older brother Jesse invites him on a weekend caving trip—even if it means spending time with Cole, Jesse's obnoxious college roommate. With Jesse's girlfriend Michelle rounding out the group, Byron is sure the excursion will be a success. Things get tense when they near the cave, only to find that the way in is blocked. Byron stumbles on the entrance to a new cave, but the thrill of his discovery is overshadowed by Cole's increasingly strange behavior. Exploring a wild cave is always dangerous, but it becomes deadly as tempers fray and the water level inside the cave starts to rise. When an underground confrontation leaves his brother seriously injured, Byron has to make some life-or-death decisions—and every second counts.
"A thrilling and compelling survival story about the bonds of family and brotherhood and the limits of human endurance under pressure…Squeeze will have readers on the edge of their seats…Highly Recommended."
– CM Magazine
"A fast-paced, compulsively readable book...Information about caving is woven seamlessly into the narrative, and descriptions of the beauty of underground rock formations are often quite lyrical. With fairly simple vocabulary, short cliff-hanger chapters, and nonstop action, this is a great choice for reluctant readers."
– School Library Journal
"Young people will identify with Byron and the need to feel wanted and to be treated with maturity and understanding. The story is filled with adventure and action. Also included is an index of cave terms to extend the reader's understanding. A great read!"
– Resource Links
"Muller puts the emphasis on action and suspense in this short tale of three Vancouver teens exploring a newfound cave rightly dubbed 'Murphy's Law.'…Rich in caver technique and terminology…Older, less-able readers will enjoy this page-turner as much as the middle-graders who are its natural audience."
– Booklist
"Even those who are slightly claustrophobic will steel themselves to follow the underground drama of Squeeze."
– CCYAB Book Notes
"A fast-paced and non-stop caving adventure that hits the ground running and doesn't slow down until the last paragraph. The plot will grab young readers from the first page while Muller's descriptive writing style provides a vivid image of cave exploration, quickly pulling readers into the story."
– National Speleological Society News
Resource Links "The Year's Best"   | 2010  |  Commended
CCBC Best Books   | 2012  |  Commended