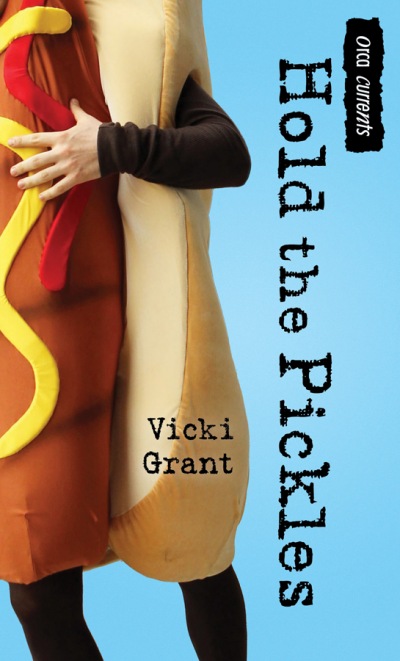 Dan Hogg is thrilled when his uncle offers him some work at a food fair, because he wants money to hire a professional trainer to help him with his scrawny physique. His excitement vanishes when he learns that the job is dressing up in a hotdog costume and handing out samples. Every dark cloud has its silver lining, Dan discovers, when he, or rather Frank Lee Better, his mascot persona, gains the attention of a pretty girl named Brooke. The attention is great until Dan finds himself under attack from Cupcake Katie and a mysterious guy with a strange interest in Brooke. It's not until he's huddling in a bathroom in nothing but his tight white underwear that Dan begins to suspect Brooke's attention might be too good to be true.
"A funny novel about a less-than-cool kid, provides a worthy option for reluctant readers looking for a light but entertaining story. Dan is a very fun character, and he's easy to relate to... He is a likeable 'everyguy' who is just trying to get through regular life while keeping his integrity."
– CM Magazine
"Filled with gross-out details of snot and slime, as well as simple wordplay, this short novel in the Orca Currents series for reluctant readers combines everyday scenarios with a clever mystery that ends with a surprising revelation."
– Booklist
"Grant is the 'it' author for YA humour of the real world. She doesn't use supernatural elements or expect the reader to suspend belief. And she never condescends to the reader or her characters. She is frank (not furter) and empowers her characters to be bona fide teens, with many positive attributes, as well as a few foibles. Her stories are funny because they could be the anecdotes of some poor teen. In fact, I'm sure that somewhere a reader is remembering a similar incident to one from Hold the Pickles and laughing hysterically...There are many teens, most especially reluctant readers, who appreciate the hi-lo nature of the Orca Currents series: compelling characters, uncomplicated vocabulary, and contemporary plots in a short read. But it's Vicki Grant's comic stylings that make Hold the Pickles an exceptional Orca Current book, as it elicits numerous laughs embellishing on the dilemmas of youth."
– CanLit for Little Canadians
"The characters are well developed, and the interesting plot has a lot of twists and turns that are easy to follow. This short, funny story will appeal to reluctant readers."
– School Library Journal
"The plot is engaging and the action is fast-paced; students will identify with the characters and issues. Grant effectively uses a less complex sentence structure and vocabulary to explore a contemporary topic in an entertaining, yet thought-provoking style. The book's small size and limited number of pages will definitely appeal to reluctant readers."
– Library Media Connection
"A fun and light story...[with] lots of silly and embarrassing humor."
– Southwestern Ohio Young Adult Materials Review Group
YALSA Quick Picks nominee   | 2013  |  Short-listed