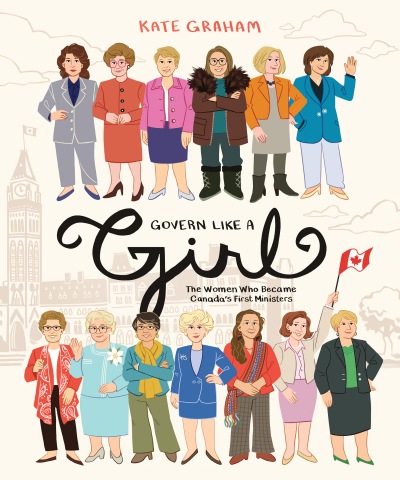 Only twelve women have ever served as the premier of a Canadian province or territory, and only one has risen to the very top to serve as prime minister. In Govern Like a Girl, Kate Graham tells the stories of these thirteen women, from childhood to political power. Their experiences span three decades, every political stripe, and extend from coast to coast to coast. What motivated them to run for office? What did they accomplish once they were elected? And how did their style of governing differ from male politicians?

From Indigenous premiers, Eva Aariak and Nellie Cournoyea, to Premier and later Senator Catherine Callbeck of Prince Edward Island, to Québec's first female premier, Pauline Marois, these powerful women changed Canada for the better and showed the world how to govern like a girl.

"Kate Graham has given young readers role models of civic duty and reinforced the idea that governing like a girl is a compliment."
– CanLit for LittleCanadians
"Govern Like A Girl is a great addition to Canadian history and education collections as well as an engaging resource for women’s studies. The text is easily accessible, the sidebars featuring each person’s historical statistics are useful for quick research projects, and the appealing comic style portraits will appeal to young readers. "
–
Canadian Children's Book Centre's Best Books for Kids & Teens, Spring 2022   | 2022  |