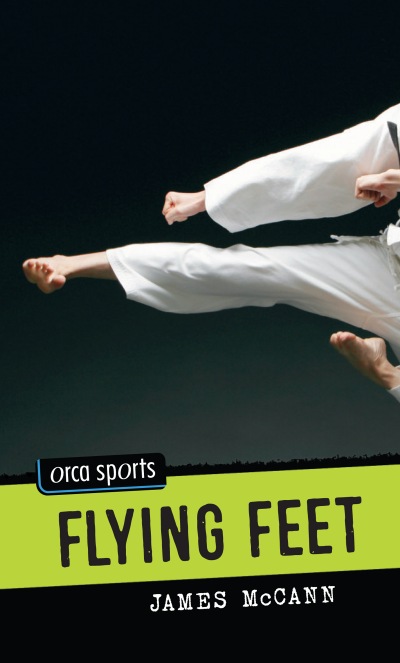 After losing yet another tae kwon do tournament, Jinho gives in to his anger and breaks his opponent's fingers. While this gets him barred from competing at his dojang, it also gets him scouted by Austin, a trainer for an underground mixed martial arts club. At first the prospect of fighting without boundaries appeals to Jinho, but the more involved he gets, the more disturbing he finds it and the harder it is to find a way out. Unlike legal MMA, which has rules and regulations, underground MMA is a free-for-all: there are no weight classes and no referees to stop the fight should it go too far. When Jinho is set up to fight a boy known as The Ripper, he realizes that he doesn't belong in this world, but the only thing that can save him is the ancient code of tae kwon do.
"More than just The Karate Kid turned up a notch but not quite Fight Club for tweens, Flying Feet is …a welcome and important socio-political ring tone for kids…It's also written in a nice, easy style that will keep both kids' and parents' interest in the outcome piqued."
– CD Syndicated
"The author does an excellent job of building tension and brings the story to an explosive close."
– Victoria Times-Colonist
"McCann doesn't demonize the sport or its participants. Instead, he offers the reader a lucid account of its appeal while eloquently describing its dark side…An appealing story about martial arts that offers teens a combination of action, suspense and a positive message, [it] will be a popular addition to public and school libraries. Highly Recommended."
– CM Magazine
"This story is filled with realistic characters and scenarios. The importance of respect in the teenage culture…will resonate with all. Ta kwon do enthusiasts will enjoy the various fighting scenes and positions explored."
– Resource Links
CCBC Best Books starred selection   | 2011  |  Commended