Daughters of the Ark 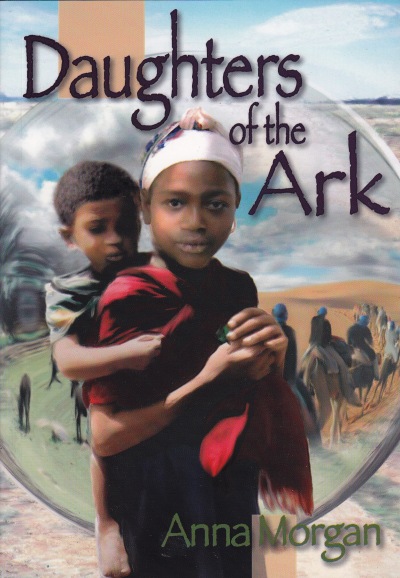 A coming-of age story about two girls, separated in time by thousands of years, who are forced to leave their homes and make a dangerous journey to an unknown land.

This book is sort of mystical and wonderful, like the world inside it.
– KidsWWrite
This tale should attract readers well beyond the ten to fourteen age category for whom the work is intended.
– London Jewish News
A wonderful historical novel that is compassionate and breathtaking for teens and adults alike.
– Association of Jewish Libraries
Good, even great at times, generally useful!
– Resource Links

This book is split into two parts, and tells the story of Jews in from two perspectives. Part One is set in 939 BCE, and is a fictionalized account of the journey of Prince Menelik (son of Kind Solomon) from to what is now . He supposedly traveled with several temple priests and their families and they took the Ark of the Covenant with them. The story is told from the point of view of Aleesha, the 14-year-old daughter of Baruch, one of the temple priests. While the author has tried to bring to life the ancient lifestyle of Aleesha and her family, the cities through which they travel, and the length and difficulty of their journey, the too-modern dialogue and the contrived “mysteries” around every corner left this reader a bit flat.

Parts Two and Three tell the real-life story of 14-year-old Debritu, and Ethiopian Jew who fled to with many others in 1984 to escape famine and military service. Debritu must care for her two younger brothers during this journey, which consists of a long walk through to , and from there through a network of underground railroad-like friends to the ancestral homeland of . The children face many challenges along the way, including illness, hunger, and fear of the unknown.

Debritu’s story is very moving and engaging. Author Anna Morgan is a journalist by trade and interviewed Debritu (now living in ) as part of her research for the story. There is an epilogue at the end of the book which updates the reader on what has happened since that journey, including some recent photographs of Debritu and her family.

Tales of endurance, bravery and sweatshops are topics of youth books. By Cynthia Ramsay

If anyone thinks that being a kid is easy, they are wrong. The Independent reviews three books targeted to readers age 10-plus that deal with serious subject matter in an entertaining and educational way. The stories' heroes – both real and fictional – show courage in the face of adversity and not only survive their harsh situations, but triumph in the end….

Daughters of the (Second Story Press, 2005) by Anna Morgan mixes fact and fiction, relating the stories of two young girls who each face a dangerous journey to a new land. The first is Aleesha, a character who lives in961 BCE – she and her family are sent from to join the court of the Queen of Sheba in . The second part of the story is based on real events and a living person named Debritu, who, because of famine and war, has to travel in the opposite direction. The girls' lives are linked through the tale of an emerald stolen from the ancient ark in King Solomon's Temple and brought to Ethiopia; handed down through the generations, it comes into Debritu's care.

Storytelling has always served myriad purposes, including to entertain, to convey history and tradition and to educate people about the world around them. Daughters of the fulfils all of these functions. The stories of Aleesha and Debritu are exciting and it is such a well-written novel for children that they almost won't even notice that they're learning about the ancient African-Jewish community known as the Betya Israel or Falashas ("Outsiders"). There is a timeline at the end of the book, as well as maps of the ancient and contemporary regions in Africa and photos of a couple of towns in Ethiopia and of Debritu (who changed her name to Shula) on her first trip back to the country from Israel, where she currently lives….