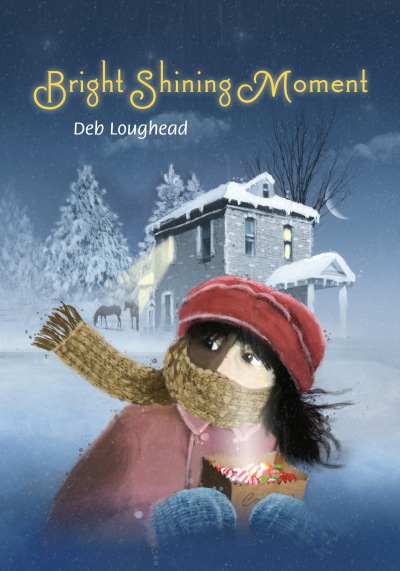 Aline hides under the hay when her father takes her to school in their horse-drawn sled. She’s embarrassed that her mother raises chickens in their yard, and doesn’t want her school friends to find out that their family has taken in boarders for the extra money. When she learns that her sworn enemy, Jeanine, can buy chewing gum, Aline is furious at the unfairness. She knows that Jeanine’s family is even poorer than her own. When Aline’s mother can’t spare any money for a charity drive at school, Aline decides to steal a coin from her purse. She quickly feels terrible. But how can she confess? Aline comes to realize that life is more complicated than she thought. A ten-cent coin can cost you more in unhappiness than you ever imagined, a sworn enemy can become a friend, and the hard times make the bright and shining moments glow even brighter.
"Deb Loughead, author of over forty children's and young adults' books, is an expert at showing rather than telling. Aline's first-person, present-tense account makes the reader feel like her friend sharing her concerns. Bright Shining Moment is both a character-driven novel and a glimpse into some social history."
– CM Magazine; Highly Recommended
...Bright Shining Moment is subtle, never moralizing, always recognizing that people's stories are far greater than outward appearances may suggest. There is an appreciation for those who struggle and understanding for those who put on façades while still recognizing that there are those who are more fortunate and still charitable.
– CanLit for LittleCanadians