When We Were Shadows 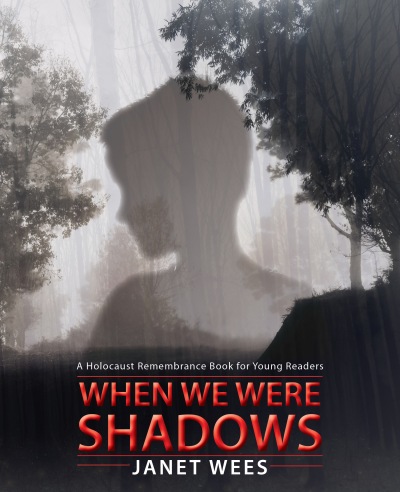 Janet Wees' When We Were Shadows is the most recent title in the award-winning series "A Holocaust Remembrance Book for Young Readers". This series provides a great educational tool for young people to learn about the Holocaust which is always a serious issue to discuss. When We Were Shadows is the true story of a young Jewish boy named Walter and his family who, because of the Nazi regime, fled Germany to start life anew in the Netherlands. Ironically, the Netherlands also falls prey to the Nazis, and Walter realizes he still isn't safe.

Throughout the story, as a young boy Walter writes letters to his Oma in Germany, and these letters provide insight into Walter's world, his thoughts, feelings and his fears. Near the end of the book, the adult Walter writes a letter to his granddaughter Jenny. Scattered throughout are other letters Walter writes to his friend Alfred (a German deserter) and to a friend of his father's (Mr. von Baumhauer). These letters also provide information about what Walter's life is like during all the hiding during the war. Readers also are provided with insight into the Dutch Resistance movement and their acts of bravery and courage to help Jewish people survive. During World War II, Edouard Henri von Baumhauer and his wife played an important role in the work of the Dutch Resistance. Walter talks about the Hidden Village which was founded by the von Baumhauers and which grew to over 100 Jews who were in hiding deep in the dense forests of the Netherlands. The book's spanning Walter's life from the ages of 6 to 14 allows the reader to see the turmoil and fear through the eyes of a child. Walter's naivety often makes the danger and fear seem like a big adventure, but, as time goes by, Walter begins to realize the seriousness of what is happening around him.

A question that always creates much discussion and debate is: "How do you explain the Holocaust to a child?" Introducing children to such a horrific topic is often difficult, and a gentle approach is often a good way to introduce the topic without inflicting the details of what humans do to other humans. Instead of dwelling on the atrocities of the Holocaust, experts recommend the introduction of books on acceptance, courage, and loyalty, exactly what transpires in the When We Were Shadows. Written in the language appropriate for the intended readers (ages 10-13), Wees has shared a true story of a young boy dealing with life at an adult level, trying to remain a boy, but realizing that his youth is no longer typical and carefree. It is clearly written and designed to be used as an educational tool for children; there is also a teacher's guide for the series available online. When We Were Shadows is a perfect choice for school libraries, whether as a stand-alone read or as a curriculum resource for teachers. When We Were Shadows will inform readers, young and old, on the journey of a young boy during the Holocaust, but ultimately it will inspire all to discover how the human spirit can triumph over evil.

Carmelita Cechetto-Shea is the Library Consultant for the Cape Breton-Victoria Regional School Board, Sydney, NS.
– CM: Canadian Review of Materials
... a perfect choice for school libraries... When We Were Shadows will inform readers, young and old, on the journey of a young boy during the Holocaust, but ultimately it will inspire all to discover how the human spirit can triumph over evil. Highly recommended.
– CM: Canadian Review of Materials
The Canadian Jewish News
March 29, 2018
When We Were Shadows written by Janet Wees, is written for children ages 9  – 13, and tells the true story of a 10-year-old boy and his family, thereby shining a light on a little-known part of Second World War history and the heroes of the Dutch Resistance.
Walter is a young child when his parents decide to leave their home in Germany and start a new life in the Netherlands. As Jews, they know they are not safe under the Nazi regime. Walter is at first too young to appreciate the danger that he is in, and everything seems like a great adventure. But as his family is forced to move again and again, from city to countryside to, eventually, a hidden village deep in the Dutch woods, Walter's eyes are opened to the threat that surrounds them ever day and to the network of people who are risking their lives to help them stay hidden.
The story begins in 1995 as adult Walter reveals to his granddaughter letters that he had written to his oma—grandma—his sister and others, about his experiences during the Second World War and told her how his mother had him write letters as a ruse to keep him quiet when he could not go to school.
Walter had to whisper at all times. He lived in a caravan, was enclosed in a forest, built a village, lived with strangers, had two narrow escapes from the Nazis and experienced constant fear.
"Jenny, here is my gift to you—my story, told with the help of those letters, about my childhood, long hidden memories," said Walter.
When We Were Shadows will cultivate empathy, invite conversation and engage the young reader with curiosity to learn more about the Holocaust.
– The Canadian Jewish News
"Engaging and inspiring, When We Were Shadows speak to the dangers of oppression, prejudice and hate, but also to the indomitable human spirit and the will to survive."
– Canadian Children's Booknews
This is a moving and sensitive true story about the strength of the human spirit to survive.
– Children's Books Heal
“When We Were Shadows” is a beautifully written book that tells an important story of survival through the eyes of a child from 1937 to 1945.
– Edmonton Jewish News
OLA Forest of Reading Red Maple Award for Non Fiction   | 2019  |  Short-listed
Canadian Children's Book Centre Best Books of 2018   | 2018  |  Commended