What Happened to Ivy 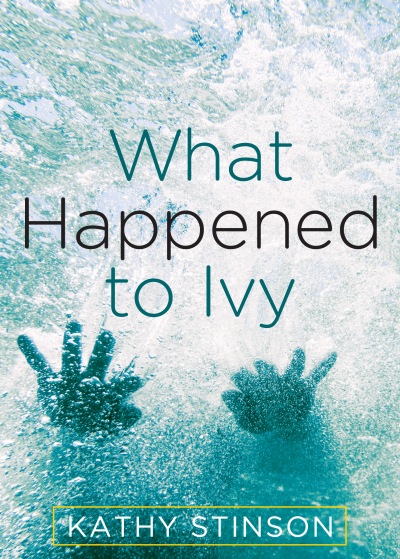 David’s younger sister Ivy, born with multiple disabilities, needs constant attention. She may be eleven years old, but in many ways she’s still a baby. She embarrasses him in public. She takes all of their parents’ focus, to the point where David wonders if they see him as anything more than a helper for Ivy. But despite it all, he loves her. The summer days are following their usual pattern of taking care of his sister, doing chores, and trips to the cottage. The one exception is Hannah, the new girl across the street. Hannah makes David feel anything but routine. He wants to be around her all the time. And, amazingly, she seems to be into him as well. Everything changes when Ivy has an accident while being looked after by her dad. As David wrestles with what happened to Ivy, he is forced to confront his own feelings of guilt, the meaning of mercy, and what can be forgiven.
In a YA landscape littered with dystopia, urban fantasy, and romantic fiction, Stinson offers an important wake-up call to young readers that there is more to life, and that it's not always easy.
– Quill & Quire
What Happened to Ivy is a valuable contribution to the growing realm of extreme “problem novels” in today’s Canadian young adult literature. Indubitably, this book deserves a place in every library in the country. And for those classrooms brave enough to tackle the topic of mercy killing, there couldn’t be a better entry point than Kathy Stinson’s novel.
– CM Magazine
What Happened to Ivy will both make you cry and question your own feelings when it comes to the meaning of mercy. I recommend this smart novel to older readers looking for a book that will making them think about what it’s really like to have friends, family and people to love.
– The National Post
This book was so powerful. It made me realise how little I know about people who are mentally challenged, and how very little the world knows about what their families do for them on a daily basis. It brought up so many questions and really showcased the complexities of this world.
– One a Day Y.A. Blog
I wish we had more books like this one. It really showed how complex these situations are and made me really take a look at my own misconceptions. I really cannot say enough positive things about this story. It's a very important one. And I hope that many more people will read it.
– One a Day Y.A. Blog
What is most refreshing about this novel is its honesty. So many novels with young protagonists shy away from giving characters real-life problems to negotiate. Stinson, however, rolls up her sleeves and really describes what it’s like to cope with a family member’s disability. She does this with great sensitivity, carefully yet frankly discussing the reality of day-to-day life...While What Happened to Ivy will undoubtedly resonate with families coping with the demands of special needs children, it can also be enjoyed for the well-wrought story that it is.
– NewPages Book Reviews
Reading David's story, I felt so strongly that he really needed to talk to someone his own age, who would listen and understand and give sage advice; then it occurred to me that very few people his age would have any sage advice to give: his situation was relatively unique, although survivor's guilt itself is not. That is a role that Stinson's book can perform admirably.
– Resource Links
This book tackles a very heavy subject with sensitivity and compassion for all those involved. Stinson masterfully depicts the stress that Ivy's condition puts on the entire family and their relationships, as well as the reality of David's situation.
– Canadian Children's Book News
David's brief, but intense, story will have you on the edge of your seat. My only criticism was that is was too short — it left me wanting more!
– The Waterloo Record
Canadian Library Association's Book of the Year Awards, Young Adult category   | 2013  |  Commended