War In My Town 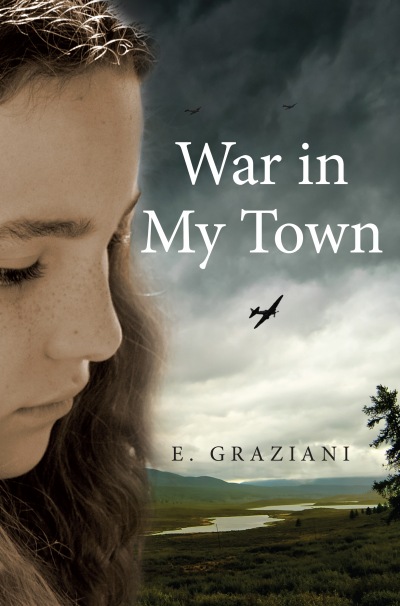 Bruna is the youngest of seven children, living an idyllic life in a small Italian village in northern Tuscany. Though the Second World War has been raging in Europe for some time, the dangers haven’t seemed to reach her, and the Italian leader Mussolini’s allegiance with Hitler and the distant reports of fighting seem far away. But before long, Bruna's brothers are called to fight and by 1943 food rationing and shortages begin to take a toll on her family. Soon the Italian people turn against their fascist regime and war comes to the region. When the retreating Nazis occupy her village, Bruna struggles to cope and help her mother and sisters stand up to the soldiers. Her peaceful life is shattered when her beloved village and its occupants find themselves in the centre of the fighting between the Nazis and the Allied forces pursuing them - the final front defended by the Nazis in Europe.
Although the history of the Second World War is taught in secondary school, the focus tends to be on the Western European campaigns.... the travails of the Italian villagers situated in the area of the Gothic Line are not nearly as well known, and Ms. Graziani has done us a favour in telling the story of her mother’s childhood during the war in the village of Eglio, in northern Tuscany.
– Resource Links
Bruna's perspective as a teenage girl caught amid the hardships and horrors of war is interesting and strongly told…. War in My Town succeeds as a testament to the strength of family and community under extraordinary circumstances, and as a tiny window into a little-known fragment of the Second World War.
– Quill & Quire
Many books have been written about the Nazi occupation of other parts of Europe, but fewer exist about Italian experiences, and Graziani deserves praise for presenting this part of the war to young readers.
– CM: Canadian Review of Materials
War in My Town is the clear and perfect title of the memoir, capturing the immediacy and the seeming impossibility of living with war at home.... Chapters sharing the story of Bruna's life are interwoven with brief, clear chapters explaining the progress of the war, as the Nazis dig in and the Allies move inexorably toward Eglio.
– Canadian Children's Book News
War in My Town is a title that would make a great addition to the middle and high school library. It would be a good choice for the classroom when studying World War II, since it shows how ordinary citizens in a small Italian village overcame the odds and survived the perils of war.
– Catholic Library World
With emotional dialogue and tense scenes, Graziani paints an unforgettable portrait of the Nazi occupation of Italy. Complete with black-and-white photographs of the heroine’s family and a map of Europe, War in My Town is a compelling, life-affirming memoir of conflict, love and loss, and the power of human resilience against almost-unfathomable odds.
– Readerly - The National Reading Campaign
...a beautifully written story that is made all the more poignant for being real. I strongly recommend you read it.
– t! magazine
War in My Town is an incredibly rich historical narrative... Any history lesson about WWII would be incomplete without a recommendation to read this book.
– Canadian Teacher Magazine
Hamilton Arts Council Literary Award for Non-Fiction   | 2016  |  Short-listed
Canadian Children's Book Centre Best Books for Kids and Teens   | 2015  |  Commended