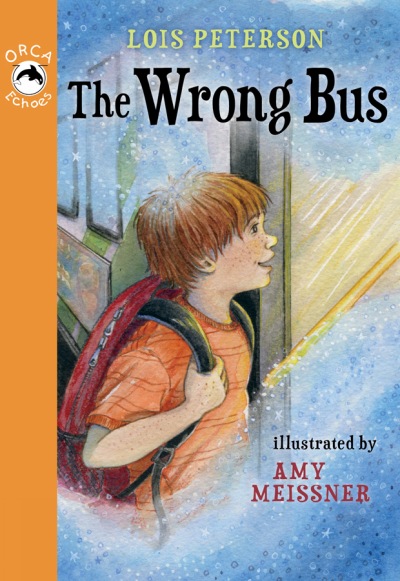 One day after school, Jack gets on the wrong bus. To his surprise he discovers Grandpa Nod is in the driver's seat of the empty bus. Grandpa Nod takes him to all the places Jack was too young to go—the hospital, the funeral home and the cemetery.

By the end of the ride, Jack has had the chance to tell his grandfather how much he misses him. And with his birthday coming soon, Jack receives a very special gift—Grandpa Nod's bus schedules. So even if he does get on the wrong bus, Jack will always be able to find his way home.
"For children who have recently lost someone in their lives, or for any child who is curious about death, this story is a good option...The Wrong Bus is a unique story that lets children confront an important subject at their own level, making it a good addition to both personal and school collections. Recommended."
– CM Magazine
"Jack soberly takes in each scene, asks cogent questions...and absorbs his grandpa’s comforting responses...while quietly demonstrating that, given just a little distance, he—and, by extension, young children in general—is indeed capable of comprehending and coping with the loss of loved ones."
– Booklist
"Peterson has addressed the issue of death and grief in a respectful manner...Readers who are dealing with the death of a loved one may find that this book gives them the tools to address the feelings they are experiencing. It could definitely be used by parents, teachers and counsellors to help young children understand the grieving process."
– Resource Links
"Although this seems like a sad story, it is well told and could help any child get through losing a grandparent."
– Southwest Ohio Young Adult Materials Review Group
"Peterson deals with a sensitive issue in a light-hearted, non-threatening manner. She allows the reader to empathize with Jack as he tries to understand and come to terms with his loss. Soft, b&w illustrations are peppered throughout the text, creating an added sense of comfort. This would be a good choice for a child who is dealing with the death of a loved one."
– Library Media Connection
"A gentle way of talking to children about aging, illness, death and grief."
– The Muskokan
CCBC Best Books   | 2012  |  Commended