The Ship to Nowhere

On Board the Exodus 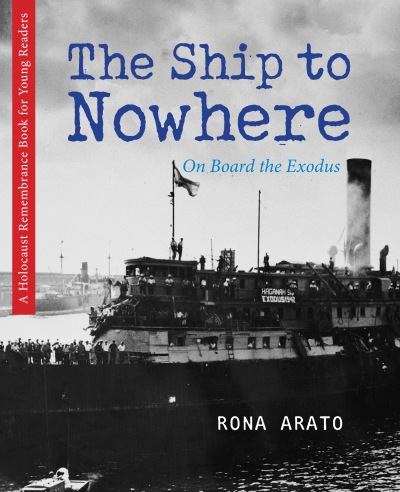 Rachel Landesman is eleven years old when she, her mother and sister are crammed on board the Exodus, a dilapidated vessel smuggling 4500 Jewish refugees risking their lives to reach Palestine, their biblical homeland. Despite all they had suffered during the Holocaust, Jewish refugees are still not wanted in many countries. Even a Canadian immigration officer famously said at the time “None is too many” when asked how many refugees Canada would take in. Nonetheless, Rachel and the other refugees refuse to give up hope when war ships surround them. Their fight, and the worldwide attention it brought, influenced the UN to vote for the creation of the state of Israel. Made famous by the Paul Newman film “Exodus”, this is the first book for young people about the ship that helped make history.
The short chapters keep the pace fast and hold young readers’ attention... A great story on its own or to add to the series, the book will be an asset to both school and synagogue libraries.
– AJL Reviews
In this timely tale, Rona Arato fuses the stories of real-life passengers with fictitious characters to create the fear, strength, and determination of refugees already devastated by war yet continuing to fight for freedom... This book is an excellent starting point for discussions regarding the Holocaust, racism, and refugees; topics which are, sadly, still in the headlines today.
– Historical Novels Review
Arato's prose is never heavy-handed, nor does it gloss over the lack of food, sanitation, or space available to those on the ship. She deftly allows well-documented events to tell the story. The photos and author's notes enhance the historical perspective.... A solid purchase for school libraries. Hand this book to intelligent young tweens in need of informational texts that dig deep and provide valuable connections to the current refugee crisis.
– School Library Journal
...a powerful and engaging tale, a story we should never forget.
– CM: Canadian Review of Materials
... an excellent book with a compelling story for children ages 9-14. It is highly recommended both for its reliable information and for the engaging way that the information is presented.
– Jewish Book Council
Sydney Taylor Book Awards Notable Book for Older Readers   | 2017  |  Commended
Canadian Children's Book Centre's Best Books for Kids & Teens - Spring 2017   | 2017  |  Commended