The Prisoner of Snowflake Falls 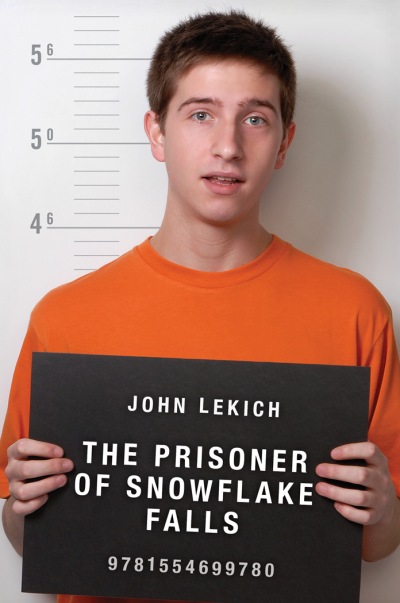 Fifteen-year-old Henry Holloway isn't immoral, he's just hungry. His mother died when he was nine, leaving him to be raised by his Uncle Andy and his friends, all amiable small-time crooks. When Uncle Andy is sent to prison, Henry takes up residence in an abandoned tree house in order to escape the notice of Social Services. His mission? To survive on his own while preserving his cherished independence. Fortunately, Henry possesses all the skills it takes to be a successful house burglar.

Henry is an unusually resourceful and considerate burglar—often tidying up the places he robs—until he's caught. The terms of his probation? He must live with the Wingates, a strange family in a small town called Snowflake Falls.

Henry is just getting used to his temporary family when the newly liberated Uncle Andy and his criminal friends draw him into a plan to rob the citizens of Snowflake Falls. Will Henry be loyal to his uncle or will he break with the past and do the right thing?
"Dry humour, a slightly insane imagination and a highly personable hero make Lekich's new novel wholly refreshing...This crime comedy is made all the more entertaining by its cast of eccentric characters, but none is more winsome than Henry—who steals cars only so he can organize his thoughts; tidies the houses of those he robs; and brings a clever, comical bemusement to his own story. Delightful."
– The Toronto Star
"It is almost impossible not to like Henry Hollaway...Lekich has provided Henry with an engaging story and a powerful voice. He has created a novel that has both a retro feel and contemporary issues...Lekich encourages us to think we can predict what will happen and then always surprises us. While we are left unsure of Henry's next steps, we feel confident that he has a bright and happy future. Recommended."
– CM Magazine
"A book rich with simple complexities and deadpan one-liners that brilliant comics will wish they had written...This is fiction that I wish were targeted to adults. Not because the book might tempt youth to glamorize crime or emulate Holloway, but because it takes certain experience and perspective to fully appreciate its deeper meaning and elegant writing. Lekich is a writer's writer. No question....The Prisoner of Snowflake Falls reverberates with the genuine, essential stuff. Stuff that (unlike all that's mean and wrong with the world) never makes the evening news. Profound meaning can be found in the smallest gesture. Echoes of the ages resound in the philosophical, social and moral ideas...Every character is flawed but inherently noble."
– www.thewayofwords.com
"Henry has a gift for understated humour and the plot is full of surprising twists and turns, sometimes solemn and sometimes very funny. Even the quirky characters—and the Wingates, in particular, are extraordinarily odd—have a refreshingly different quirkiness to them. Readers will be engaged by Henry's predicaments, his honesty (when crime isn't involved) and his unique moral code. They will certainly laugh and they might even pick up the odd security tip."
– Canadian Children's Book News
"There are plenty of amusing parts and the language...is playful and Runyon-esque...This is a charming, funny coming-of-age story with terrific writing, characters to root for, and a completely satisfying ending to a silly caper."
– School Library Journal
"This amiable tale of misadventure is a sweet, entertaining read with a good moral compass. The author has a delightful sense of playfulness and imagery, and provides many feel-good moments. The tone is light and the story sprinkled with all the usual teen angst plus that which is felt by a surprisingly moral fifteen-year-old thief."
– VOYA
"Lekich's characters in The Prisoner of Snowflake Falls are the treasures that readers look for in great fiction. They are unique and true to themselves, good or bad, and evolving."
– CanLit for Little Canadians blog
"What a voice! With wit and a wondrous imagination John Lekich has crafted a character I will long remember and admire...As readers we meet an incredibly diverse slate of characters, unconventional and wise, empathetic to Henry's plight and gullibly welcoming to all visitors. Henry comes in contact with people who have an impact on the decisions he makes, and he is averse to hurting them. You don't want to miss meeting any of them."
– Sal's Fiction Addiction blog
"An excellent read—funny, witty, and perfect for the young adult group...Recommended for any YA or high school library."
– Jane on Books blog
"Lekich has created a character worth caring about...For those who enjoy quirky characters and stories of redemption, this is a good bet."
– Booklist Online
"Sweet-tempered and hugely enjoyable."
– Vancouver Public Library, Staff Fiction Picks
"With his impeccable writing skills, author John Lekich has created an antagonist who is also a protagonist. Despite his foibles, Henry is both comical and pitiful, lovable and enviable...There is not a 'cutsie' ending to this story. It is authentic, unpredictable and humorous. Young readers as well as old will enjoy Henry's character, the Wingates' antics, Lekich's descriptions of small-town life, and the overall message of the book."
– Tri State YA Book Review Committee
"The Wingate family and the whole town of Snowflake Falls is as refreshingly quirky as the band of criminals Henry grew up with and helps keep the tone light...[Readers] will be thoroughly charmed by Henry's antics and the wacky cast of characters that populate Snowflake falls."
– Resource Links
"Henry is a likeable character, and readers will root for him to redeem himself."
– NJ Youth Services
"Full of humour, compassion, love and commitment to family. The characters are charming, funny and surprisingly complicated."
– Nikki Tate-Stratton, CBC All Points West
CCBC Best Books starred selection   | 2012  |  Commended
Sheila A. Egoff Children’s Literature Prize nominee   | 2013  |  Short-listed
TriState YA Review Group Book of Note   | 2013  |  Commended
Manitoba Young Reader's Choice Award nominee   | 2013  |  Short-listed
Stellar Award nominee   | 2014  |  Short-listed