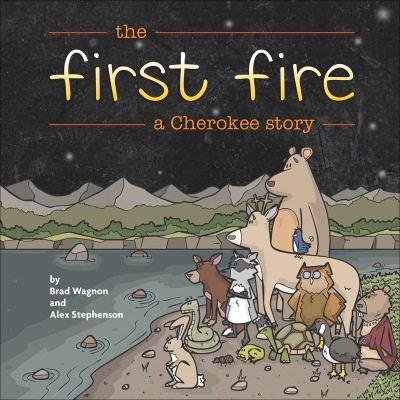 The First Fire, A Cherokee Story takes place in a time when animals could do many of the things that people do. The Creator gave the animals the world to live on, but they were without a source for heat at night. Great Thunder and his sons saw the plight of the animals so he sent lightning down to strike a tree. The tree burst into flames but the tree was on an island. Many animals tried to bring the fire over the water to the shore, but they were all unsuccessful. Then one small creature, Water Spider, volunteered. Curious, the animals said to her “We know you could get there safely, but how would you bring the fire back without getting burned?”
Water Spider was successful and to this day the water spider is revered in Cherokee culture.
★“According to Cherokee tradition, when the animals needed fire to keep them warm during cold nights, The Thunder Boys, invoke a lightning bolt to strike and light fire to a lone sycamore tree. Water Spider, a tiny savior, boldly creates an ingenious way to bring fire back to the animal community. Black-outlined characters have a friendly, Saturday morning–cartoon look that nevertheless carries the story’s gravitas well. A heartwarming tale of kinship and community.”
– Kirkus Reviews, starred review
“My kids and I absolutely love reading The First Fire. It’s a Cherokee story that I had shared with them many times, but this book brings the story to life. The illustrations are like a guide to our oral storytelling tradition. This is a book that remains on our nightstand, and is a go-to bedtime story for our family.
–
“Young listeners will be able to flip through the tale on their own, and enjoy the animals' adventures after the tale has been read. It's a great way to introduce Cherokee folklore and open the door to discussions. In other words, this one gets a nice thumbs up from me!”
– Bookworm for Kids blog
“The illustrations are cute... and the moral of the story rings true: no matter who you are, how insignificant you may feel, you can do great things. You can think of imaginative solutions and act on them. You can be a hero to yourself, and to your people.”
–