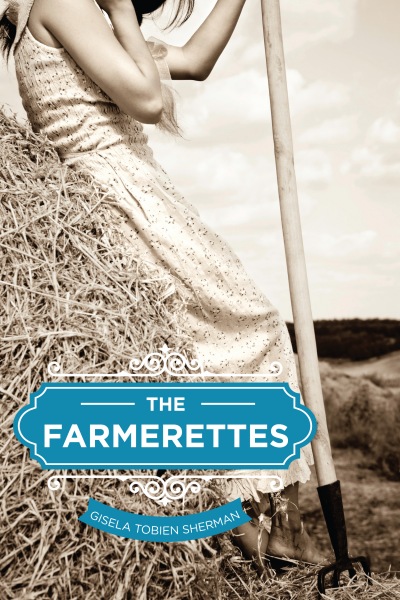 Six girls just out of high school live together during the summer of 1943 on a farm as part of the Farm Services - doing the work of the men who are off fighting the war in Europe. We follow the stories of Helene, who sends her wages home to support her single mother; Peggy, a flirt with a secret she must keep; Binxie, whose rich family doesn't approve of her; Isabel, who pines for her fiance off fighting in Europe; and Jean, whose family farm has been taken over by the "farmerettes", as they were known. Friendship, romance, hardship, and heartbreak shape their summer, all against the backdrop of the Second World War.
Part history lesson, part eye-opening slice-of-life, The Farmerettes is a touching, well-paced story of girls bound together by a sense of civic duty and desperate circumstance that forever changed the definition of “women’s work.”
– Readerly - The National Reading Campaign
"[Tobien Sherman] deserves praise for identifying a less-explored part of Canada's World War II history and recognizing its potential for a novel."
– CM: Canadian Review of Materials
"The tone of The Farmerettes is gentle, but [Tobien Sherman] doesn't pull back from life's harsher truths. The girls - directly or through other characters - deal with relationship pressures, family expectations, depression, the deaths of loved ones, and the lingering consequences of war and loss."
– Resource Links
"Through her thoughtful writing, Gisela Tobien Sherman gives young readers a clear and captivating picture of how war changes everyone, from those who are fighting in it to those who are left behind."
– Quill & Quire
In capturing the spirit and camaraderie of these young women, Gisela Sherman has brought to life an important, and largely unheralded, part of Canadian wartime history in a way that will resonate with today's readers.
– Canadian Children's Book News
[The Farmerettes] is engaging and often emotional... Historical fiction lovers will appreciate this book both for its depiction of rural wartime life and for its pop culture references.
– School Library Journal
Impressively well written from beginning to end, The Farmerettes is a thoroughly absorbing read and very highly recommended for both school and community YA fiction collections.
– The Midwest Book Review
Geoffrey Bilson Award for Historical Fiction for Young People   | 2016  |  Short-listed
Terrific Teen Titles Historical Fiction by the Canadian Children's booknews   | 2019  |  Commended