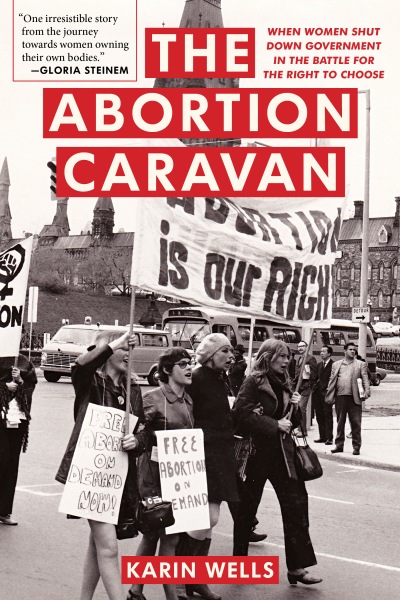 In the spring of 1970, seventeen women set out from Vancouver in a big yellow convertible, a Volkswagen bus, and a pickup truck. They called it the Abortion Caravan. Three thousand miles later, they “occupied” the prime minister’s front lawn in Ottawa, led a rally of 500 women on Parliament Hill, chained themselves to their chairs in the visitors’ galleries, and shut down the House of Commons, the first and only time this had ever happened. The seventeen were a motley crew. They argued, they were loud, and they wouldn't take no for an answer. They pulled off a national campaign in an era when there was no social media, and with a budget that didn't stretch to long-distance phone calls. It changed their lives. And at a time when thousands of women in Canada were dying from back street abortions, it pulled women together across the country.
Wells’s powerful book affirms that such ongoing obstacles to women’s autonomy and reproductive rights are why the Abortion Caravan matters more than ever.
–
Wells’s descriptions of political action in the days before social media and #MeToo are at times witty and always fascinating.
– Canadian Authors Pick Their Favourite Books of 2020
Shaughnessy Cohen Prize for Political Writing   | 2021  |  Short-listed
Ontario Historical Society Award's Alison Prentice Award   | 2021  |  Winner