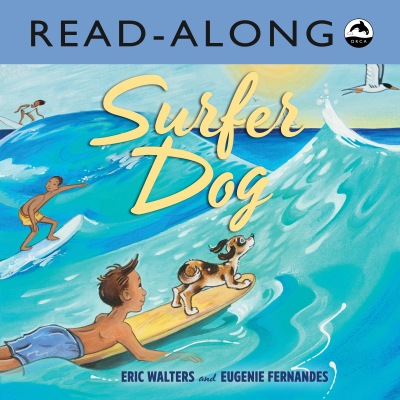 What is the true meaning of friendship? Follow along as a boy meets up with his friend—a dog who faithfully waits for him every day so they can ride out to the beach together to surf. The boy doesn't own the dog and he doesn't know who does, but their daily routine has created a special bond. Award-winning author Eric Walters navigates the waters of a unique friendship alongside the vibrant illustrations of Eugenie Fernandes, who brings the bumpy roads, rugged beach paths and rolling waves of the tropics to life.

Sometimes the most poignant relationships in a child's life are the ones between friends.
"With its vibrant illustrations and loving message about the joy and trust shared between friends, Surfer Dog is a charming tale that shows how the pull of the surf can bring people&#8212and dogs—together."
– CM Magazine
&quotThe relationship portrayed in the book is special and touching."
– Resource Links
&quotAn excellent reading addition to a classroom friendship unit."
– Canadian Teacher