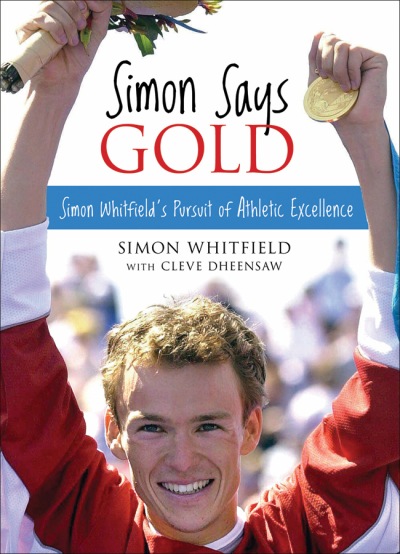 From the moment Simon Whitfield burst onto the world stage at the 2000 Sydney Summer Games as triathlon's first Olympic champion, his winning personality and stellar athletic abilities have inspired young people around the globe.

In Simon Says Gold, Simon describes his personal journey to Olympic glory as he recounts not only that glorious day in Sydney, but also the anguish of failing to repeat as Olympic champion in Athens in 2004, and his dramatic comeback at the 2008 Beijing Games, when his exhilarating race to a silver medal enthralled millions of fans around the world. Simon's stories of the highs and lows of his running career will captivate readers young and old, but his real message—that the simple pursuit of excellence is its own reward—will also inspire and motivate. Not everyone can be an Olympian. Simon Whitfield believes that true greatness is in performing to the best of one's ability. The reward is in the effort, not the outcome.
"The author has captured Whitfield's candour and an engaging sense of humour in a straightforward, balanced writing style that brings this sports hero to the accessible level of the guy next door…For any aspiring young athlete feeding on the climate of high excitement at the approaching 2010 Winter Games in Vancouver, Simon's story will be inspirational. Highly Recommended."
– CM Magazine
"[Simon's] honesty about his failures and uncertainty, as well as the dizzying excitement of victory, provides the drama in this action-packed biography…The star's personal highs and lows (he remembers his first triathlon when he was a teen), along with the details about preparing for the triathlon's three sports--running, cycling, and swimming--will grab teen athletes and fans…Readers will look forward to cheering Whitfield on in 2012."
– Booklist Online
"[Whitfield] tells his story with candor, and he sheds light on the dark side of early success and the pressures athletes face…Participants and fans of track and field will enjoy Whitfield's insider's perspective and cheer his determined comeback."
– School Library Journal
"An interesting book that takes a look at what it really takes to be an Olympic athlete...Any school library that serves a population of sports fans or Olympic enthusiasts should consider adding this volume to their collection."
– Resource Links
Chocolate Lily nominee   | 2011  |  Short-listed
CCBC Best Books   | 2011  |  Commended