Sacred Song of the Hermit Thrush 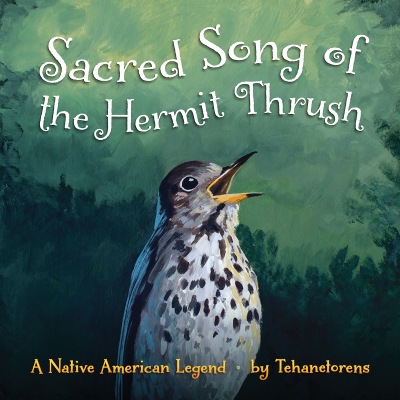 Long ago, when the birds had no songs, only man could sing. When the Great Spirit walked on the Earth, he noticed a great silence. He realized the birds had no songs. He devised a great game and told the birds who ever could fly the highest, would receive a very beautiful song. But not all the birds were honest. In his desire to win the game, the small hermit thrush jumped on the back of the great eagle. The eagle flew higher than any of the birds, but when he came back to land, the Great Spirit said the hermit thrush had gone the highest since he was on the eagle’s back.
Hermit thrush was awarded a beautiful song, but in his shame for not being honest, he flew into the deep woods. To this day, you may hear the lovely song of the hermit thrush, but you may not ever see him.
“A Mohawk pourquoi tale explains how the hermit thrush and other birds got their songs. The telling is stately, with a steady, oral cadence. The dappled paintings offer field guide–worthy images of the bird characters and depict the Good Spirit with brown skin and long, straight black hair. Lovely.”
– Kirkus Reviews
“The tale in this book is one which is entertaining and intriguing enough to draw listeners in.  The birds are depicted with enough true-to-life accuracy to keep them very recognizable. Anyone wanting to introduce young readers to the Mohawks, will definitely find this book a treat. Makes a lovely read-aloud book.”
– Bookworm for Kids blog