Richard Was a Picker 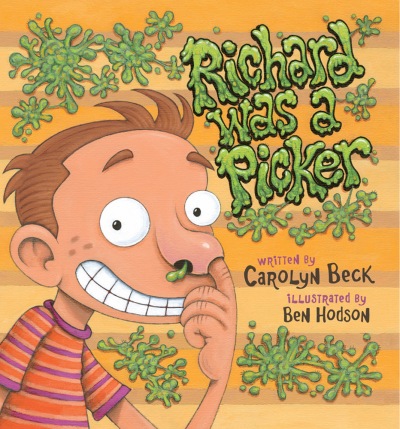 Richard picks his nose, until one day he discovers the perils of his habit.

When his finger gets stuck up his nose, Richard panics. Then his nose sucks up his arm. Before he knows it, all of him slides up his nose. Richard has become a giant booger. He propels his booger-ball self out of his house. But as he rolls down the sidewalk things get worse, way worse. Soon the whole town is chasing after him and jabbing at him. Will Richard be poked to pieces? With some quick thinking and a little luck, Richard avoids a terrible end.

"The rhyming text clearly bounces along…Saturated in disgusting descriptions, this vile offering pointedly targets boys of a certain age, and the gross-out humor will surely elicit plenty of eews along the way. Mission accomplished."
– Kirkus Reviews
"An orginal, funny, gooey, and even heartwarming new picture book…Beck's imaginative poetry [ ] is fast-paced and will have adult readers laughing along…Hodson's illustrations are brilliantly done. Kids will love how he splashes every page (including the cover) with enormous green boogers that actually draw readers in instead of repelling them. To Richard's peers, he's merely a picker. To the reader, however, he's a young artist shunned for his craft."
– Quill & Quire
"Hodson's sticky green acrylics-and-colored-pencil illustrations hearken back to the anything-for-a-gag Garbage Pail Kids gross-outs of the 1980s and really take off when Richard is completely sucked into his own nose and becomes a giant ball of mucus…Icky for sure, but that's the whole point."
– Booklist
"Beck's rhyming text vividly describes the exaggerated quantities of bright green snot seen throughout this book and the panic Richard endures when he becomes 'stuck'...Oozing all over the pages of this book, [Hodson's illustrations] will elicit variations of YUCK and UGH from the audience. Fun vocabulary (gooky, clabbery, old Mrs. Rappertaffy) and entertaining animals add interest to this story. Readers, with a strong stomach, could share this humorous tale with children who are learning about hygiene, bad habits or the importance of good manners."
– Resource Links
"Richard was a picker, With his finger up his nose. It's quite a nasty habit As most anybody knows. ... The concept is kid-friendly In a gross, disgusting style. The pictures are hilarious and sure to make you smile."
– Puget Sound Council for Reviewing Children's Media
"A bouncy, rythmic text...Entertaining for fans of gross-out humor."
– The Horn Book Guide
"EWWW! GROSS! You can just hear it from all those kids who love any book that makes adults cringe. Take Richard, for instance....please! How can kids love a guy who picks his nose and creates 'castles, farms and zoos' from his ooze? Well, if you know kids, you know that is exactly what will happen. In the hilarious words from Carolyn Beck's pen and the grossly exaggerated images from Ben Hodson's acrylic paints and colored pencils, you will find yourself reading a funny, mucilaginous story to overattentive young listeners. Everything that you, as an adult, find abhorrent, they will find hilarious and heartwarming...The story moves quickly and rhythmically from start to finish. Even adults will giggle at some of the antics; kids will find them grossly delightful! The artwork is a perfect accompaniment to the text, showing green boogers in all their glory as they vandalize the town and its people. With the final denouement, listeners will see that Richard has learned a lesson, while everyone else must deal with the aftermath of that learning."
– Sal's Fiction Addiction blog
"Beck's verse is rollicking and suitably revels in the repulsive topic...Hodson's illustrations are a delight—silly, slimy and exuberantly coloured."
– Canadian Children's Book News
"Fun for kids [who] savor a good gross-out...Hodson's illustrations...[are] deliciously slimy...Beck has a flair for funny phrases (and alliteration), so why not read it aloud (even at Halloween)? Lots of fun."
– BookLinx 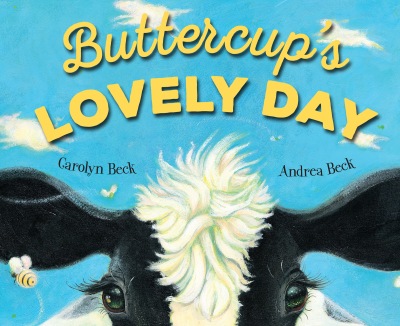