How kids are changing the world 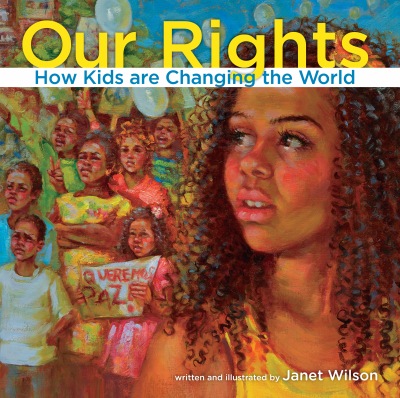 A girl who spoke out against her government for the rights of aboriginal children, a boy who walked across his country to raise awareness of homelessness, and a former child soldier who wants to make music not war. Here are true stories of kids just like you who are standing up for their rights. Read about how they have made a difference. Dylan Mahalingam from the USA started an online charity to raise money to fight child poverty. The bravery of Nujood Ali Mohammed from Yemen inspired other girls who were being forced to marry too young. Anita Khushwaha from India became a beekeeper to pay for school, even though it was considered a job only men could do. All of them are making a difference for children’s rights.
An introduction to the positive action kids are taking globally to improve the lives of children everywhere. Colorful sidebars feature other kids in action, while “Kids Take Action,” “Kids Create” and “What Youth Can Do” sections provide more examples of youth empowerment.
– Kirkus Reviews
An excellent introduction to the imaginative approaches youth are taking to make the world a better place for all children.
– Booklist
This companion to the author’s Our Earth: How Kids are Saving the Planet (2010) takes on issues of social justice and human rights. Profiling ten children from around the world, readers will see how kids can make a difference.
– International Reading Association: Reading Together Online
This collection of short, factual biographies is well-written and documents the activism of children from far and near (e.g., South Korea, Philippines, Yemen, and the United States). It concretely demonstrates that children are making, and can make, positive changes in their worlds while fighting for and actualizing their rights. Thus, the book is inspirational as well as aspirational for young people-- especially those in grades 3-8.
– CM Magazine
Our Rights is for any teacher looking to inspire children to be aware of and do something about injustice to children within the global community. Readers of all ages will be impressed and awed.
– ETFO Voice
Wilson includes beautiful paintings and photographs of the featured children, and six pages of information that will inspire youth to take their own stand against injustices they see or have experienced.
– Resource Links
Although most students are likely to be aware of problems such as hunger, bullying, and the effects of natural disasters, Our Rights will open their minds to the existence of many more. Topics include gender and caste systems in India, inadequate schools for indigenous children in Canada, and child slavery in Sri Lanka.
– School Library Journal
Ontario Library Association Silver Birch Express Award (Non-Fiction)   | 2014  |  Short-listed
Children's Book Centre Best Books for Kids and Teens   | 2013  |  Commended
Bank Street College's "Best Children's Books of the Year" (Law and Justice category)   | 2014  |  Commended
Rocky Mountain Book Award - Alberta's Children's Choice Book Award   | 2015  |  Short-listed