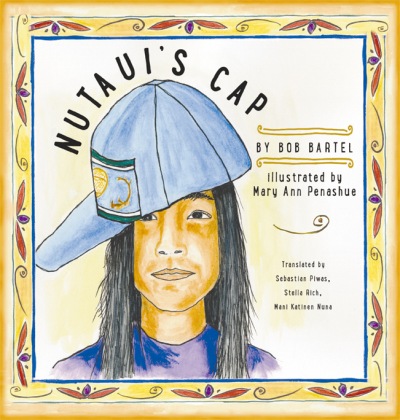 A moving story of protest and determination, Nutau's Cap tells of a young Innu girl, Nanas. The low-level flying of NATO supersonic jets disrupts her family's traditional way of life, and endangers both them and the wildlife they depend upon, so Nanas' father and the other members of the Sheshatshiu community decide to protest by occupying the military's runways. Nanas is proud and eager to join in the social action, but then her father is arrested. Nanas has little to comfort her except his well-worn ball cap, and the promise of the land itself that the resilience, wisdom, and strength of the Innu people will one day triumph.

This true account of one small moment in the years-long struggle of the Innu people against NATO and the Canadian government brings to light the on-going fight for Innu rights on their own unceded land. Author Bob Bartel, an activist and volunteer, participated in the efforts to stop those NATO practice flights; he learned Nanas's story from her aunt and has Nanas's permission to tell the story. Bartel writes with care, simplicity, and deep awareness; he portrays with both power and subtlety the struggle as seen from a child's perspective.

Illustrations by acclaimed Innu artist Mary Ann Penashue capture the gentle relationship between Nanas and her father, and highlight the beauty and dignity of her people's culture. Her blending of traditional imagery with modern technique offers a visually rich and compelling accompaniment to Bartel's text.

Nutau's Cap has been translated into two dialects of Innu-aimun, both of which appear alongside the English. Some Innu-aimun words are also integrated into the English text; a glossary is provided. A map of the locations and a historical afterword, offering further context, are included as well.