Native Defenders of the Environment 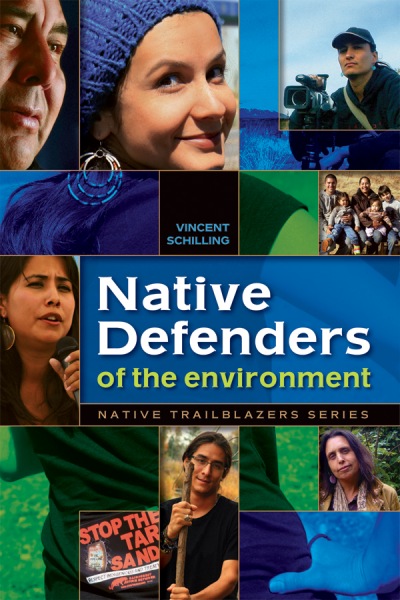 From the Native Trailblazers series comes a new book with the stories of twelve brave people who work tirelessly to save our environment. These are stories of courage, determination and resistance to multinational corporations and disastrous government policies that are harming the planet. Readers will learn about Grace Thorpe, who worked to keep Native reservations from becoming nuclear waste dumps; Tom Goldtooth, the director of the Indigenous Environmental Network; and Winona LaDuke, who works on a national level to raise public support and create funding for Native environmental groups. Read about the next generation of Native environmentalists, including Ben Powless, a founding organizer of the Canadian Youth Climate Coalition; Melina Laboucan-Massimo, tar sands campaigner for Greenpeace Canada; and Teague Allston, an intern with the National Wildlife Federation tribal and public lands program.
"Individual chapters provide excellent introductions to Native activists, useful for research and perhaps inspiring future campaigns."
– Kirkus Reviews
"Native leadership emerges from many facets of our community. Native Defenders of the Environment brings their stories and the beauty of their words and actions to light and offers us a way to continue being inspired by the greatness of Indigenous worldviews and optimism for the future."
–
"The Native Trailblazers Series is refreshing because of its accent on the positive contributions of Native people...Whether the young readers are Native or non-Native, it matters little, Native Trailblazers provides the impetus for young readers to make positive contributions to society themselves. Native Defenders of the Environment is a must for teachers who teach young people about the importance of the protecting the environment."
– Native News Network
Green Earth Book Award nominee   | 2012  |  Short-listed
American Indian Youth Literature Award Honorable Mention   | 2011  |  Commended
Next Generation Indie Book Awards nominee: Multicultural Non-Fiction   | 2012  |  Short-listed
ForeWord Reviews Book of the Year Awards nominee: Juvenile Non-Fiction   | 2012  |  Short-listed