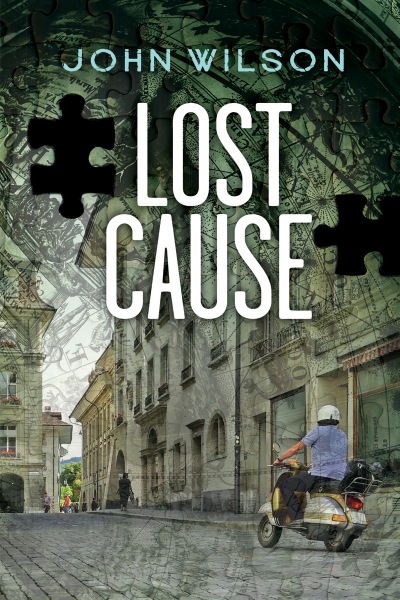 Steve thinks a trip to Europe is out of the question—until he hears his grandfather's will. Suddenly he's off to Spain, armed with only a letter from his grandfather that sends him to a specific address in Barcelona. There he meets a girl named Laia and finds a trunk containing some of his grandfather's possessions, including a journal he kept during the time he fought with the International Brigades in the Spanish Civil War. Steve decides to trace his grandfather's footsteps through Spain, and with Laia's help, he visits the battlefields and ruined towns that shaped his grandfather's young life, and begins to understand the power of history and the transformative nature of passion for a righteous cause.

Steve's adventures start in The Missing Skull, part of The Seven Prequels and continue in Broken Arrow, part of The Seven Sequels.
"Posthumous messages and tantalizing clues send a teenager from Canada to Barcelona in search of a hidden chapter from his beloved grandfather's past. Steve slowly gains insight into how it felt to believe passionately in a cause—even, in this case, a doomed one—and then to lose that innocent certainty in the blood and shock of war."
– Kirkus Reviews
"I had to force myself to take a break for food or sleep once in a while. I just wanted to keep reading. This was an excellent book and I'm happy I picked it up to read."
– YALSA YA Galley Teen Review
"The second book in the astounding Seven Series, Lost Cause will have readers going halfway around the world for more!"
– YALSA YA Galley Teen Review
"The descriptions of the war—and the emotional reactions of Steve and his grandfather at two different points in history—are rich and poignant...Steve is a relatable teenager, with an honest voice and realistic reactions to his situation...Some of the most compelling parts are the grandfather's journal entries which give amazing insights into the strategy and struggle of war. These, paired with the stories of the current day Spanish people, paint a complete picture of the war and its enduring effects...Highly Recommended."
– CM Magazine
"The dialogue is witty and sharp...The Spanish setting oozes charm, beauty and history. Readers will feel as if they are scootering with Steve and Laia along narrow roads and through timeless tiny villages steeped in the memory of a bloody civil war."
– Resource Links
"[The] adventures are exciting and readers will be anxious to pick up the next book in the series. Great for middle grade boys who want realistic fiction with action and suspense."
– NJ Youth Services
"A story of great adventure and action that will introduce readers to a portion of history that is not familiar to most students. There is a good mix of action and romance. Sure to appeal to upper midle school and younger high school students. An excellent purchase."
– TriState YA Book Review Committee
YALSA Quick Picks nominee   | 2013  |  Short-listed
TriState YA Review Group Book of Note   | 2013  |  Commended