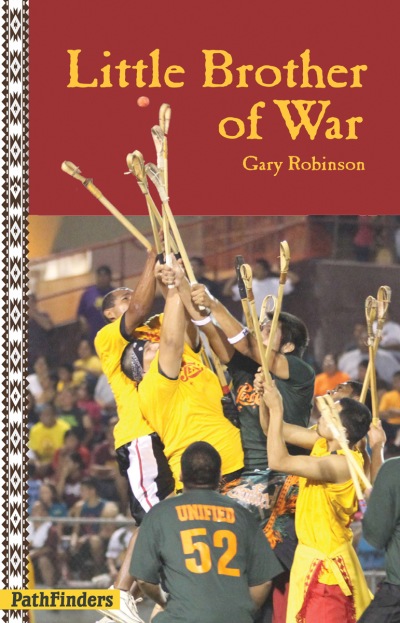 Sixteen-year-old Mississippi Choctaw Randy Cheska has lived most of his young life in the shadow of his older football-hero brother, Jack. After Jack is killed while serving in Iraq, Randy's father puts even more pressure on Randy to excel in football. But Randy has no interest in sports and has never been good at them. Imagine Randy's surprise when he discovers stickball, a game he's immediately drawn to. But stickball is a sport Randy's father considers a relic of the Choctaw past, when it was known as Little Brother of War and was used to settle disputes between communities. Randy's determination to play this legendary game, guided by a mysterious visitor, leads him on a challenging and unexpected journey of self-discovery.
"[A] worthy tale...The cultural and historical information is laid onto the story with a light hand."
– Kirkus Reviews
"There is strength in the depiction of a young man finding his way by looking to his roots, and Robinson powerfully captures the exhilaration of knowing exactly where one belongs."
– Booklist
"The tension between respecting Choctaw tradition and embracing change are at the heart of Robinson's strong addition to the PathFinders series about Native American teens...The story captures the believable friction in Randy's family and introduces a bit of American culture that will be new to many readers."
– Publishers Weekly