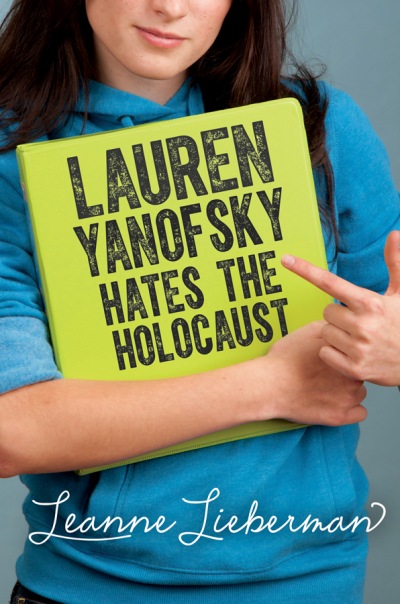 Lauren Yanofsky doesn't want to be Jewish anymore. Her father, a noted Holocaust historian, keeps giving her Holocaust memoirs to read, and her mother doesn't understand why Lauren hates the idea of Jewish youth camps and family vacations to Holocaust memorials. But when Lauren sees some of her friends—including Jesse, a cute boy she likes—playing Nazi war games, she is faced with a terrible choice: betray her friends or betray her heritage.

Told with engaging humor, Lauren Yanofsky Hates the Holocaust isn't simply about making tough moral choices. It's about a smart, funny, passionate girl caught up in the turmoil of bad-hair days, family friction, changing friendships, love—and, yes, the Holocaust.
"The Nazi war games juxtaposed with Lauren's Jewish background and the way she must come to terms with the problem and her emotions are thought-provoking themes which allow Lauren to develop throughout the book. Her maturing process literally goes through a 'trial by fire,' and a different Lauren emerges in the final pages of the novel. Recommended."
– CM Magazine
"Lieberman, known for her edgy, provocative Jewish-themed novels,...creates another strong female protagonist, whose characterization of Judaism as a religion 'about loss, grief and persecution' will raise eyebrows with both Jewish and non-Jewish readers. A thought-provoking exploration of a teen's evolving ideals."
– Kirkus Reviews
"[Lieberman] smoothly weaves humor and knowledge about Judaism through Lauren's story. Lauren's narration is contemplative and from the heart, and readers should relate to her attempts to identify her beliefs and tackle life's big questions."
– Publishers Weekly
"Heavy topics get a lighthearted treatment in this smart, observant story of a girl who has had it with being Jewish...Lieberman draws a strong portrait of a girl who can't find comforting answers, and that is the strength of this book."
– Booklist
"Lieberman explores not only a teenager's journey of personal identity, but likewise how she incorporates her interpretations of Judaism into the mix...Thought provoking."
– Shalom Life
"Lieberman touches [on] moral and ethical issues in a simple, direct novel. Teens will relate to the realistic dialogue and teen angst...Lieberman gives the reader a lot to think about, in a very compact style filled with humor, reality, and drama. The book will appeal to teens looking for a realistic, teen drama about morality and ethics."
– VOYA
"Lieberman provides a realistic, satisfying ending that doesn’t tie things up too neatly. Teen issues of changing friendships, first kisses, family friction, and drinking are combined with fully developed characters, spot-on contemporary dialogue, and a unique plot that will give readers of all backgrounds plenty to think about."
– School Library Journal
"Lauren Yanofsky is a lively teen learning to come to terms with her Jewish identity."
– Resource Links
"Lauren is very funny and the novel contains a great deal of humor...Religious schools and/or youth groups will find it a great way to stimulate discussion."
– The Reporter (Jewish Federation of Greater Binghamton)
"Lieberman, known for her focus on Jewish issues, deftly explores a teenager’s struggle with her religious identity...Major issues such as the perpetration of hate, loss, grief and the quest for identity are handled with sensitivity and humour in this novel, and readers will be left with lots to consider and discuss."
– Canadian Children's Book News
"Starting with an edgy title, this is a realistic, yet entertaining coming of age story. Lauren, a fairly intuitive seventeen-year-old, is faced with many of the typical issues of growing up such as bullying and racism. How she manages to find a place in which she feels comfortable as a teenager and how she learns to accept her Jewish identity make this a thought provoking read...The plot resonates with the universal theme of belonging."
– Jewish Book World
"Funny, smart, and thoughtful.Teenage readers will relate to Lauren’s obsession with hypocrisy, as well as her worries about popularity and boys and her autistic brother. My 12-year-old loved this book, as did I, and it spurred some really great conversation. Highly recommended."
– Tablet Magazine
CCBC Best Books   | 2013  |  Commended
Sydney Taylor Notable Books for Teens   | 2014  |  Commended
Bank Street College of Education Best Children's Books of the Year   | 2014  |  Commended