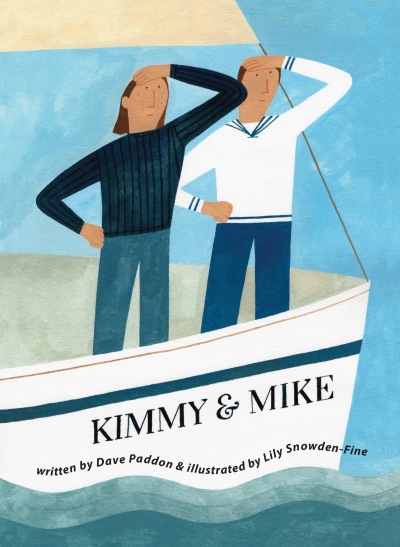 Dave Paddon and Lily Snowden-Fine team up in this hilarious tall tale about a brother and sister who set out to find some fish for their father’s supper. The fish aren’t biting, so Kimmy and Mike head off to see if they’ll have luck on the other side of the ocean. En route they encounter a hurricane, a giant squid, pirates, a merman, an iceberg and much more. Theirs is a round-the-world adventure with plenty of fun. But it’s still up to their mother to find something for the pot.

Paddon’s playful rhymes resonate with Newfoundland dialect; Snowden-Fine’s illustrations are a marvelous match.
★“A rich and resonant tall tale that celebrates imagination even as it underscores enduring truths.”
– Kirkus Reviews, starred review
“With Lily Snowden-Fine's gorgeous gouache artwork to complement Dave Paddon's story, though, Kimmy & Mike goes beyond just a folk tale.”
– CanLit for LittleCanadians
“A fun introduction to a long-standing tradition, written by one of Newfoundland and Labrador’s foremost storytellers.”
– Quill & Quire
“Paddon’s skill chimes through in more than the rhyming, although the rhymes are adept and so fun. It’s also the spritely, animated reach and scale of the tale.”
– The Telegram

“A good book to be read aloud, Kimmy & Mike celebrates the strengths and traditions of Newfoundland and Labrador.”