Jack and the Manger 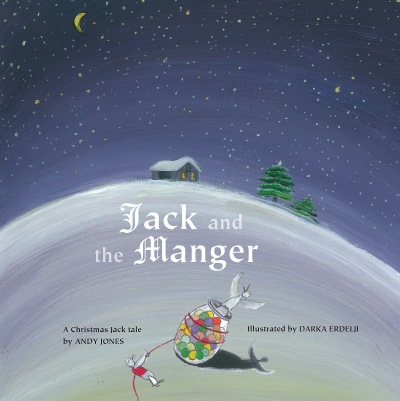 Jack and the Manger retells the story of Jesus's birth as if it were a Newfoundland folktale. It's all seen through the eyes of Jack, the hero of many a story, who befriends a young couple on their walk to Bethlehem. There's a bit of 'angel talk', some gravel pit camping, an edge-of-your-seat birth drama, and the low-down on how Caesar Augustus's 'count-and-tax plan' brought them all together. It's a down-to-earth version of a heavenly tale.

Gentle, playful, and very funny, Jack and the Manger is the second in an on-going series of Jack tales, combining the talents of Andy Jones, one of Newfoundland's finest storytellers and actors, and Darka Erdelji, one of its most distinctive artists. It was a Christmas sensation in St. John's when it was first published, and is sure to please even the most Grinch-like of readers.

Erdelji, whose illustrations for The Queen of Paradise's Garden were widely praised, captures the sly wit, intelligence and great heartedness of Jones's tale in her pictures once again. Jack and the Manger is a fine Christmas tale for young and old alike.
"Everyone needs joy and beauty at Christmas, and this latest Jack tale supplies both in abundance."
– The Northeast Avalon Times
"The usual Christmas story of Bethlehem, shepherds and stars has taken an unexpected turn. Such is only to be expected when it is being told by Andy Jones. Jones has performed the traditional Jack Tales for years, and recently debuted the stories in print with The Queen of Paradise's Garden. There, as here, Jones' words are compellingly illustrated by Darka Erdelji's colourful and Expressionistic images."
– The Newfoundland Quarterly
"The Christmas nativity story has been set in Canada before—notable examples are The Huron Carol and Kurelek's A Northern Nativity—but never has it been combined with a folktale character, set in outport Newfoundland, and served up with such cunning craft. Highly recommended."
– Canadian Review of Materials
The Bruneau Family Award for Children’s/Young Adult Literature   | 2012  |  Winner
Heritage and History Book Awards   | 2012  |  Short-listed