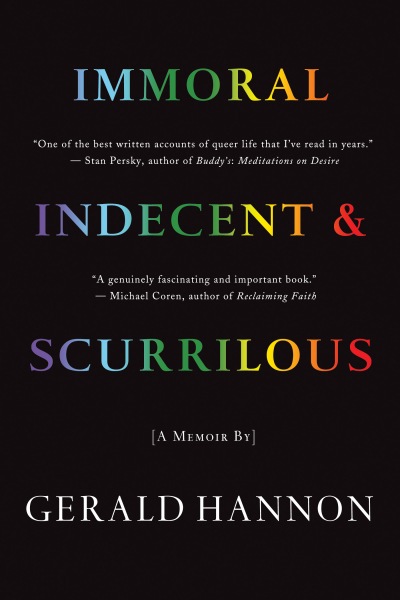 When 18-year-old Gerald Hannon left his small mining community in Marathon, Ontario, to attend the University of Toronto, he never would have predicted he’d become part of LGBTQ+ history. Almost 60 years later, he reflects on the major moments in his career as a journalist and LGBTQ+ activist. From the charges of transmitting immoral, indecent and scurrilous literature laid against him and his colleagues at The Body Politic to his dismissal from his teaching post at Ryerson University for being a sex worker, this memoir candidly chronicles Hannon’s life as an unrepentant sex radical.
★ “The author’s long-time experience in magazine journalism is evident; he has an eye for detail and the prose is readable and engaging, punctuated by lively physical descriptions of the principal players in the story… Immoral, Indecent, and Scurrilous is a memoir of both uncommon viewpoints and uncommon bravery in expressing them.”
– Quill & Quire, starred review
“Besides an intimate view of his own life, loves and outrages, Hannon’s memoir is a cogent insider account of radical gay activism in Toronto beginning in the mid-1970s: the bath house raids, the launch of Gay Pride and the history of The Body Politic collective, the publication where Hannon was a staff photographer, reporter and chronicler of sexual mores.”
– Globe & Mail