A True Story of the Holocaust 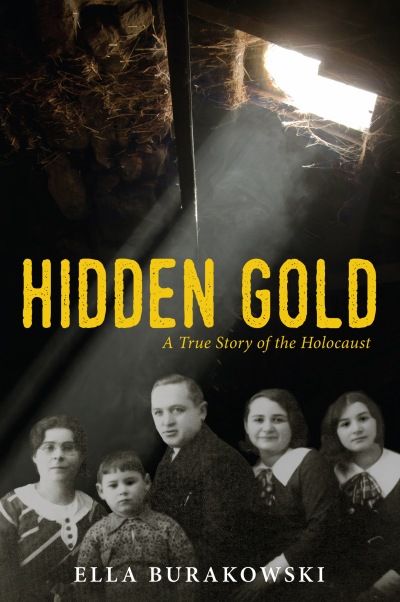 The Gold family lived an idyllic life in pre-war Poland, each doing their part to run the family grocery store and tobacco concession. The oldest daughter, Shoshana, had many friends, her sister Esther was meticulous as she worked at the family store, and young David was doted on by them all. But that life is shattered in 1939 when Germany invades Poland and Jewish people are forced into the streets; their homes, schools, and businesses burned. We follow the Gold family’s journey as they are forced into hiding. Just hours before the Nazis come to take over their current town, their mother has a premonition that today they will have a savior. When that someone appears, they are given hope for the first time since leaving home. But Shoshana has learned to be wary of strangers and knows that her family is in danger. The Golds hide in a cramped, secret enclosure for twenty-six months. Appalling conditions, starvation, fear of imminent betrayal and capture makes this a heart-stopping testament to the human spirit.
... an affirmation of human courage.
– Kirkus Reviews
The story of a Polish-Jewish family forced into hiding from the Nazis is by its very nature compelling, and the Golds’ familial bond and undaunted spirits are commendable...
– Publishers Weekly
Infinitely stunning... Burakowski crafts an excellent story based on the recollections of her family.
– Paper. Work. Blog.
Even though the subject matter is difficult, the portrayal of the characters is dynamic and heartwarming... A fine purchase to support curriculum related to World War II and Holocaust studies.
– School Library Journal
Hidden Gold is a perfect title for this book that pays tribute to the strength of family and the resilience that each member drew upon to help them individually and collectively survive the ordeal. The book will nurture empathy in readers young and not-so-young alike.
– CM: Canadian Review of Materials
[Hidden Gold] is a simply told story that grabs at your heart and is a reminder of the horrors of war and the bond of family love.
– Calgary Herald
In this labour of love, Burakowski reminds us the millions who perished were all individuals who died horrible deaths, and that those few who survived owed their lives to a fate no less arbitrary than that which led others to their death.
– Winnipeg Free Press
...the well-developed characters and the bond between the Gold family members as they endure terrible hardships end up making this an engaging story.... The book also includes pictures of the Gold family, the barn where they hid, and various other objects and documents that help the reader understand this incredible true story.
– Resource Links
Exceptionally well written and presented, "Hidden Gold" is a valued and welcome addition to the growing library of Holocaust literature. Very highly recommended for community and academic library Holocaust Studies collections.
– The Midwest Book Review
This powerful book is presented like a mystery. The reader eagerly reads page after page in order to discover what will happen to the desperate characters.
– Jewish Book Council
Red Maple Non-Fiction Award   | 2017  |  Short-listed