From Kitchen to Carnegie Hall 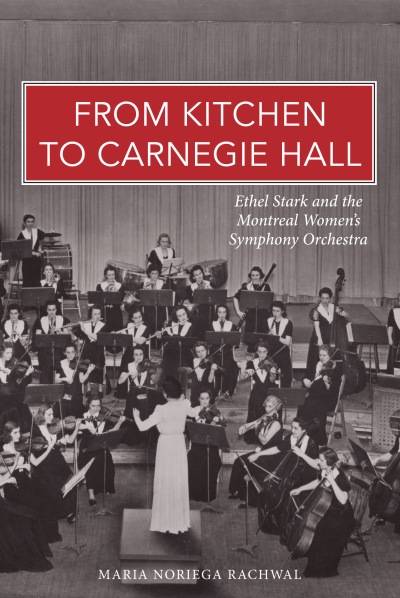 In the 1940s it was unheard of for women to be members of a professional orchestra, let alone play “masculine” instruments like the bass or trombone. Yet despite these formidable challenges, the Montreal Women’s Symphony Orchestra (MWSO) became the only all-women orchestra in Canadian history. Formed in 1940, the MWSO became the first orchestra to represent Canada in New York City’s Carnegie Hall and one of its members also became the first Canadian black woman to play in a symphony in Carnegie Hall. While the MWSO has paved the way for contemporary female musicians, the stories of these women are largely missing from historical records. From Kitchen to Carnegie Hall illuminates these revolutionary stories, including the life of the incredible Ethel Stark, the co-founder and conductor of the MWSO. Ethel’s work opened doors of equal opportunity for marginalized groups and played an important role in breaking gender stereotypes in the Canadian music world.
From Kitchen to Carnegie Hall is meticulously researched and written in an engaging style... a valuable contribution to both the history of women in music and the history of Canadian music.
– The Kapralova Society Journal
The sad irony of the book is that although nostalgic in feel -- generously peppered with fascinating black-and-white photographs -- the issues the book addresses are depressingly modern. There's a poverty of female conductors in classical music to this day.... [From Kitchen to Carnegie Hall is] impressive, and would make an excellent gift for aspiring young musicians.
– Winnipeg Free Press
This is an important story of a remarkable woman whose push against the established norms led her to form one of the most remarkable music ensembles of the mid-twentieth century. From Kitchen to Carnegie Hall is highly recommended for all Canadian libraries.
– Canadian Association of Music Libraries Review
Noriega Rachwal tells the story of Stark and her orchestra with unbridled enthusiasm and an abundance of facts, quotes and conversations, both real and reconstructed.
– Herizons Magazine
A joyous, uncanny and entertaining narrative of women who trace a path for themselves in a man’s world, very well-illustrated and researched.
– Vine Awards for Canadian Jewish Literature
This book is sure to please a wide variety of readers: feminists, musicians, historians and any other reader who enjoys a good story, well written and well told.... highly recommended for all libraries.
– AJL Reviews
Vine Awards for Canadian Jewish Literature - History   | 2016  |  Short-listed