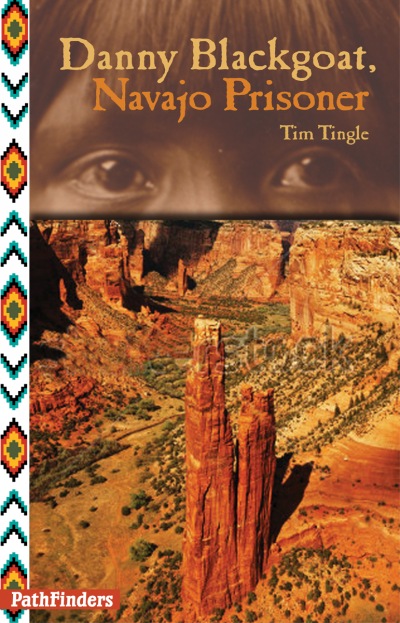 Danny Blackgoat is a teenager in Navajo country when soldiers burn down his home, kill his sheep and capture his family. During the Long Walk of 1864, Danny is labeled a troublemaker and given the name Fire Eye. Refusing to accept captivity, he is sent to Fort Davis, Texas, a Civil War prisoner outpost. There he battles bullying fellow prisoners, rattlesnakes and abusive soldiers until he meets Jim Davis. Jim teaches Danny how to hold his anger and starts him on the road to literacy. In a stunning climax, Jim—who builds coffins for the dead—aids Danny in a daring and dangerous escape. Set in troubled times, Danny Blackgoat is the story of one boy's hunger to be free and be Navajo.
"Tingle, a Choctaw storyteller, spins a good yarn and, along with other respectful references to Navajo culture, ingeniously leverages its particular aversion to mention of or contact with the dead to magnify the terror of Danny's climactic challenge...A positive tribute to the fortitude of Danny and his Navajo community."
– Kirkus Reviews
"A fast-paced historical novel [that] adds a memorable perspective to Native American literature for teens...This narrative vividly brings to life suffering among the ten thousand Navajo people captured and mistreated before the Bosque Redondo Treaty in 1868. Tingle, an enrolled Oklahoma Choctaw member, makes the past feel contemporary. This exciting novel will be enjoyed by readers interested in stories about hidden, unjustly imprisoned, or marginalized teens who seek to escape and get justice."
– VOYA