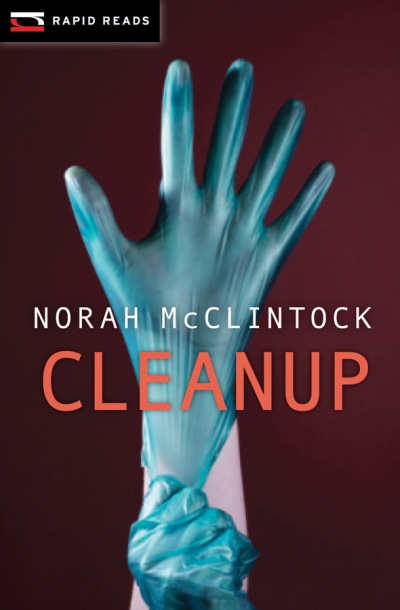 Connie Suarez, downsized from her job as a legal secretary, is working as a maid.

She's getting used to picking up after people and putting their lives in order. But she is not prepared for the mess that awaits her when she arrives at work one morning to find her employer dead on the floor of his bedroom. Connie's co-worker Maria, an undocumented immigrant from Colombia, quickly becomes the prime suspect in his murder.

When Maria begs her for help, Connie cannot refuse. As she tries to discover what really happened, she learns that Maria has been keeping a number of things from her. Now Connie can't decide who or what to believe. And that's not the worst of it. Connie soon realizes that she herself is also a potential target for violence. The question now is, will she be able to clean up the mess that Maria is in without getting killed herself?

"This title is from Rapid Reads, a line of shorter books targeted to adult learners, reluctant readers and others seeking high-interest reading material. With a fast-paced plot and simple narrative, this story fits the bill. Connie is a likable and smart protagonist who uses her abilities in unusual ways. It also includes a rather nuanced look at the challenges faced by Latinas, whether they are in the country legally or illegally. Weighing in at just 128 pages, this solid mystery is good for both the series' target audience and readers who don't want a long-term commitment."
– Kirkus Reviews
"Would have appeal to reluctant readers of any age who like a quick who-done-it...Cleanup delivers an action packed, easy to read, attention getting plot."
– Annette's Book Spot blog
"An intriguing, well-written murder mystery by an accomplished author...It will appeal to older teen and adult reluctant readers."
– CM Magazine
"Many readers will enjoy the fast pace and conflicts...A good choice for middle school and high school libraries. Due to its size and fast plot development, the book will find a niche with reluctant readers as well."
– TriState YA Book Review Committee