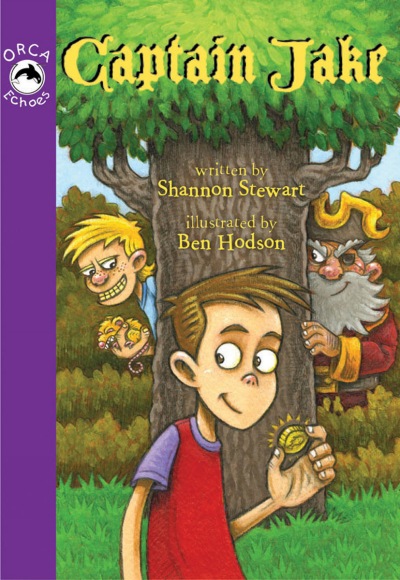 Jake loves to hunt for treasure, so when the famous pirate Captain Kidd asks him to be his cabin boy, he can't refuse. But Jake soon learns that bringing home an invisible pirate can be a real disaster, particularly when the pirate is mortally terrified of his teenage sister. There are many rules of the sea, and Captain Kidd's own cabin boy, Richard Barleycorn, teaches Jake how to face his biggest fear, Boris Baxter, the meanest boy in the whole school.
"A good beginning chapter book for younger students...Recommended."
– Tucson Unified School District
"Shannon Stewart definitely knows what appeals to young boys... Recommended."
– CM Magazine
"This easy-to-read, beginning chapter book blends fictional character with real facts...Large print, short chapters and many full page illustrations make this a good chapter book for developing readers."
– Resource Links
"Fast-paced easy fiction that many boys and girls would enjoy. The theme of bullying is addressed in a simple, light-hearted yet relevant matter. Recommended."
– The Bookmark (BCTLA)
"The plot of the story is very well developed for a young reader, and doesn't lend itself to sugary sweetness, but hilarious humor that readers will enjoy and relate to in their own family. This is an excellent mix of plot, theme, and character development that will push a beginning reader into chapter books without a struggle."
– Southwestern Ohio Young Adult Materials Review Group