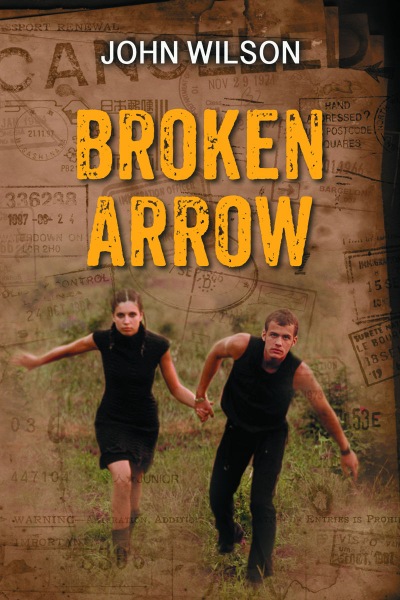 Steve thinks he made the right choice turning down a snowy week with his cousins at a cabin in northern Ontario in favor of a relaxing (and perhaps romantic) time under the Spanish sun with his friend, Laia. But when an email from his brother DJ arrives, implicating their grandfather in some shadowy international plots involving nuclear bombs, Steve and Laia immediately put aside all thoughts of a lazy, sun-drenched vacation. In a desperate attempt to find out if Steve’s grandfather was a Cold War-era spy, they crack mysterious codes, confront violent Russian mobsters, dodge spies, unearth a bomb and avoid nudists. But the more they uncover, the more Steve wonders: whose side was Grandpa really on?

Broken Arrow is the sequel to both The Missing Skull, part of The Seven Prequels and Lost Cause, part of Seven (The Series).
“With only a forged passport and a coded message as clues, Steve will need all the help he can get to figure out whether his grandfather was a well-traveled businessman or a double agent...Steve’s quest is part-Cold War mystery and part-Spanish history lesson...The puzzles are satisfyingly difficult...the information about a little-known chapter in history is interesting and the setting is beautiful.”
– Kirkus Reviews
"Wilson does an excellent job of bringing readers back into Steve’s world right from the first chapter, detailing the emotions and desires of the protagonist in the character’s own words. While this title has a lot to offer as a standalone—without too much lead up to the action and just enough backstory to afford understanding—it does best as a sequel...One of Broken Arrow’s definite strengths is the dialogue as it differentiates characters, moves the plot forward at a perfect pace, and introduces facts in an easily digestible way. With its absorbing beginning, unpredictable ending, and series of heart-stopping encounters in between, Broken Arrow is a great bet for the male tween demographic, though girls will like it, too! Highly Recommended."
– CM Magazine
"This thrill-a-minute series will hook reluctant readers as well as fans of James Bond and Jason Bourne."
– School Library Journal
"The warm, dusty atmosphere of rural Spain and the busy city of Barcelona with its loving traditions bring this story to life. Early teen readers both boys and girls will be quickly drawn in to this compelling mystery that effortlessly teaches history as it entertains with panache."
– Resource Links