Box of Treasures or Empty Box? 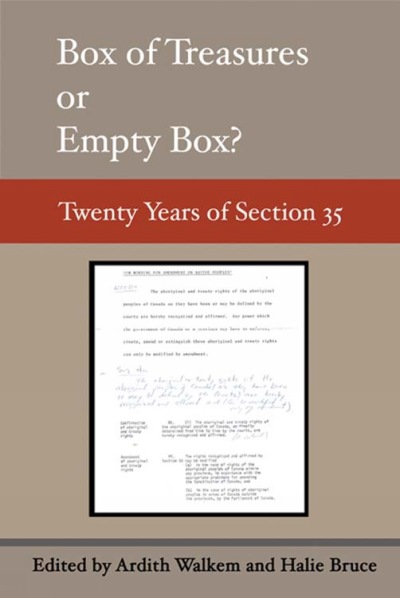 Over twenty years ago, Aboriginal and Treaty Rights were included in Section 35 of the Constitution Act, 1982. They provided the basis for recognition of the unique status of Indigenous Peoples within Canada. After four first ministers' conferences on Aboriginal Constitutional Matters failed to produce any substantial agreement between Indigenous Peoples and Canada, the precise meaning and content of Section 35 has remained unclear. As a result, Section 35 has been largely defined through a series of court cases, but despite these cases, many Indigenous and non-Indigenous people continue to have different visions of the possibilities and limitations of Section 35. Box of Treasures or Empty Box? brings together these voices to explore community, political, legal and academic perspectives on whether or not Section 35 has helped or hindered Indigenous Peoples' aspirations for Self-Determination and Nationhood.
Contributors include Halie Bruce, Arthur Manuel, Louise Mandell, Mark Stevenson, Catherine Bell, Robert Paterson, Ian Waddell, Lee Maracle, John Borrows, Millie Poplar, James Tully, Douglas Harris, Cheryl Knockwood, June McCue and Ardith Walkem.