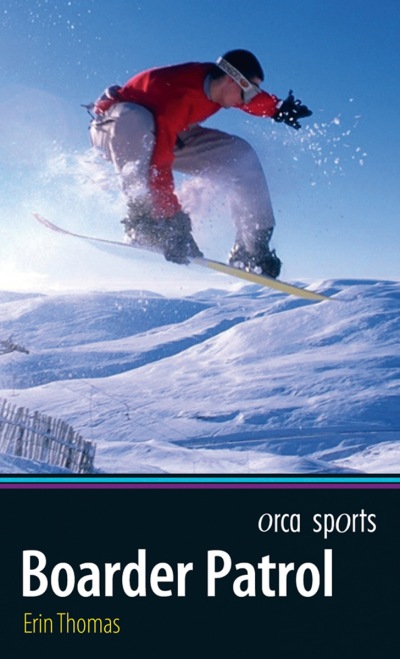 Ryan is determined to be a professional snowboarder but he's learned from what happened to his whistle-blower father that doing the right thing doesn't always pay off. When his parents leave Kamloops, Ryan decides to stay with relatives so he can be near the Salmon Valley Ski Resort. He spends all his time at the ski hill, volunteering with the Junior Safety Patrol to cover the cost of his lift pass.

When his board is stolen, he discovers that his cousin, Kevin, knows more than he should about recent thefts at the resort. Kevin's in way over his head, and soon Ryan's involved, whether he wants to be or not.

As Ryan prepares for the video shoot that could be his big break, he learns that Kevin's in danger. Ryan has to choose between career and family, and hope that, for him, doing the right thing will pay off.
"The snowboarding sequences are exciting, and Ryan's conversational voice as narrator is accessible and likable…The exciting climax cleverly draws all the storylines together in a way that showcases Ryan at his best [and] features dramatic racing down the runs. Recommended."
– CM Magazine
"A fast-paced read filled with not only snowboarding action, but also skiing accidents and rescues, competitions, and even duffel bags filled with pot. Erin Thomas's book should appeal to adventure fans, thrill seekers, and mystery readers."
– TeensReadToo.com
"This hi/lo novel takes readers on a fast-paced ride filled with action and danger…The story includes vivid descriptions of snowboarding and mountain rescue, and the mystery is involving."
– School Library Journal
"Thomas has written a fast-paced story that never feels like it is being rushed. Boarder Patrol's plot unfolds quickly, but Ryan remains an engaging character whose struggle to do the right thing for himself and his cousin feels genuine. Even readers who are not interested in sports will enjoy the unravelling of the mystery surrounding the crime spree at the ski hill...Highly recommended."
– Resource Links
Resource Links "The Year's Best"   | 2010  |  Commended
CCBC Best Books   | 2011  |  Commended