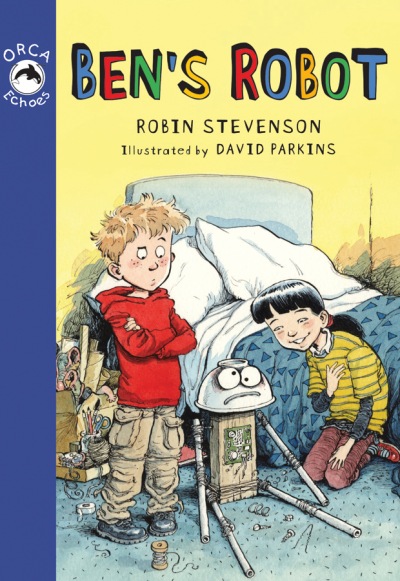 Seven-year-old Ben loves pretending to be a robot, but his best friend Jessy is tired of being ordered to oil his knee joints and check his batteries. She says the robot game is boring and runs off to play with someone else. So Ben decides to build a real robot instead. He's built all kinds of things before: wind generators, solar-powered marble launchers, pinball machines. But none of his creations have ever really worked. Until now.

When his robot begins talking, Ben is thrilled. However, nothing goes quite the way he thinks it will. Ben's robot is rather difficult to get along with. He complains a lot. He's bossy. He never wants to do anything Ben suggests. Having a real robot isn't nearly as much fun as Ben thought it would be. And to make things worse, no one—not even Jessy—will believe him.
"Stevenson, whose son inspired this story, certainly knows the heart of children like Ben and can communicate the fun and frustrations of learning…This delightful story, which tells the tale of an adventurous little boy, will keep young readers flipping the pages to see what will happen next. Highly Recommended."
– CM Magazine
"A story which will be enjoyed by both male and female audiences, Ben's Robot highlights the challenges of friendship, play, imagination, and sharing…This is a humourous, imaginative and creative story that will hook reader and imagination alike. Highly recommended."
– Resource Links
"A great additional purchase as an early chapter book, with accessible text and decent plot. Illustrations are charming."
– Puget Sound Council
"Within a simple story, Robin Stevenson subtly weaves the elements of imagination, friendship and loneliness, along with a bit of mystery and magic. With just a few details, she fills out Ben's personality...Parkins' fine illustrations are fun and move the story along easily for the new reader. His googly-eyed robot is a gem."
– Canadian Children's Book News
"A fun read that should attract young readers."
– BookLinx
Resource Links "The Year's Best"   | 2010  |  Commended
CCBC Best Books   | 2011  |  Commended
Chocolate Lily nominee   | 2012  |  Short-listed