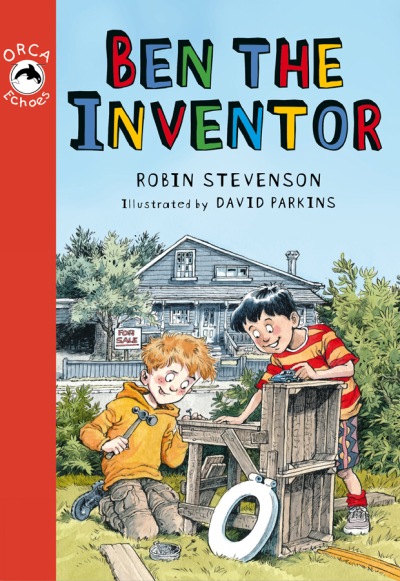 Inventors invent inventions! That's what Ben and his best friend Jack like to say. So when Ben discovers that Jack's family is planning to move to another city, he decides they should put their inventions to work. The boys figure that if no one buys Jack's house, Jack won't have to move away, so all they need is a plan to scare off potential buyers! Inventors are good at coming up with plans. But when Plans A, B and C fail to bring the results the boys had hoped for, Ben discovers that not everything in life stays the same—and that while change can be hard, sometimes it isn't all bad.
"[The characters'] plans share a common feature, a quality of dreaming and scheming that seems perfectly age appropriate: Not too well thought out, but very imaginative...Ben and Jack exchange a lot of believable dialogue...Attractive, cheerful black-and-white full-page illustrations appear every few pages...Everything about this [book] is charmingly upbeat...Its winsome attitude makes it fun."
– Kirkus Reviews
"Humorous yet poignant, this story highlights the friendship and creativity of two endearing characters...Faithful to the hopes and fears of young children and enhanced with fine pencil drawings, Stevenson's second chapter book about Ben rings true for anyone who has had a friend move away."
– Booklist Online
"A delightful story about best friends and shared visions...Stevenson's message provides comfort while demonstrating problem solving techniques to keep friendship alive even at a distance."
– Resource Links
"This book gives early readers an extended reading experience; short chapters provide quick success in reading and make the book easy to read in installments...Children who face a move will find comfort in this enjoyable story of friendship. Young inventors might get some ideas too."
– Library Media Connection
Resource Links "The Year's Best"   | 2011  |  Commended