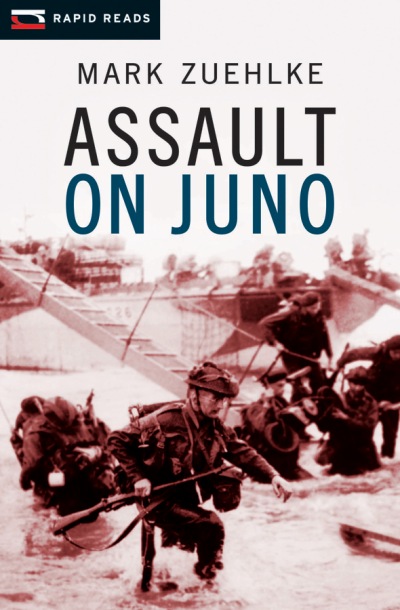 Dawn, June 6, 1944. Off the Normandy coast 6,500 ships carry 150,000 Allied troops. This is D-Day, the long-awaited Allied invasion of German-occupied Europe. The Allies will storm five beaches. One is code-named Juno Beach. Here, 14,500 Canadians will land on a five-mile stretch of sand backed by three resort towns. The beach is heavily protected by a seawall, barbed wire, underwater obstacles and hundreds of mines. Behind these defenses a heavily armed German force waits inside thick concrete pillboxes and deep trenches that bristle with machineguns and artillery pieces.

About 3,500 Canadians will lead the way. The fate of the invasion is in their hands. They either break the German defenses or die trying. Piling out of small, frail landing craft, they struggle through bullet- and shell-whipped water to gain the sand. And the bloody battle for Juno Beach begins.

With his trademark you-are-there style, acclaimed military historian Mark Zuehlke plunges readers into a vivid and powerful account of the day-long battle that put the Allies on the march toward victory in World War II.
"Assault on Juno, a detailed and poignant account of a horrific event, is accurate and well researched. The intended readership should have no trouble with it. It is clearly written and easy to understand. It is suitable for recreational reading, and, in the thoughtful reader, will raise many questions about the futility of war and why so many young men had to die."
– CM Magazine
"An admirable monograph on a Canadian military achievement of WWII...This promising series claims to be easy reading, and it certainly has succeeded so far in being accessible to those with limited familiarity with the technicalities of military history, whether Canadian or not."
– Booklist
"Written with little pomp about the grandeur of battle, Zuehlke provides a variety of statistics to indicate the extreme loss of life in this single maneuver. The storytelling is terse; male readers in particular will enjoy the straightforward style."
– Southwest Ohio Young Adult Materials Review Group
"Very informative...[and] makes history accessible to everyone...Highly recommended for addition to any high school or public library collection. Librarians should keep this (and others in the series) for reluctant, ESL or adult literacy readers."
– Tri State YA Book Review Committee