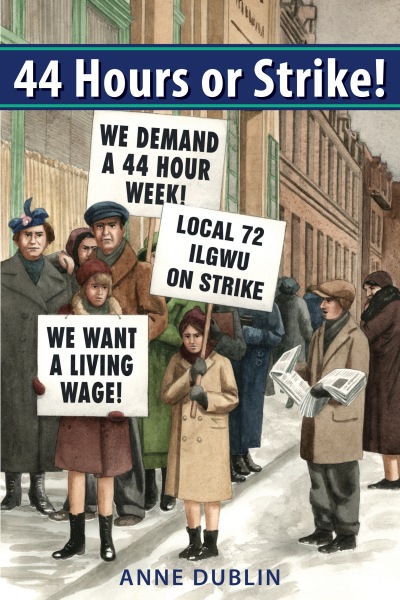 The Toronto Dressmakers’ Strike of 1931 brings young sisters Sophie and Rose together in their fight for better working conditions, decent wages, and for their union. It’s a tough battle as distrust and resentment of immigrants is growing, with many people blaming their poverty and difficulties on these workers. Sophie and Rose are faced with unexpected — and sometimes violent — barriers, and they quickly find that a strike is more than just a march. Barely into the strike, Rose is imprisoned after a fight in a picket line, leaving fourteen-year-old Sophie to take care of their ailing mother at night and spend her days protesting in the freezing wind. Rose’s isolation in prison weakens her resolve for change. Will they be able to continue the fight for what they once so strongly believed in? In the midst of anti-Semitism and the Great Depression, Sophie, Rose, and their union come together to try to make a lasting change.
Intense, dramatic descriptions bring out the hardships of sweatshop life in the early 1930s… A realistic look at a hard-fought fight.
– Kirkus Reviews
... a well-paced dramatic story.
– CM: Canadian Review of Materials
Rose and Sophie are powerful characters who grow up through the suffering they endure… Excellent dialogue demonstrates character… and allows emotion to boil to the surface as strikers confront scabs.
–
Historical events and characters are woven in among the fictional characters providing a context for the events that unfold. The story is fraught with difficult decisions that no young person should have to make, but it provides interesting historical insights for the youth of today.
– Jewish Book Council
Organizations like ETFO [Elementary Teachers' Federation of Ontario] know that teaching young people about historic union experiences can not only help bolster our appreciation of our struggles, but also can connect us with the struggles of all workers today. 44 Hours or Strike! is a first step in making that connection.
– ETFO Voice
Dublin has undertaken a good deal of research, including archival investigations, to bring the period and its issues to life.... The twenty-two page teacher’s resource guide, which is available online... provides a wealth of ways students can engage with this excellent piece of historical fiction.
– Canadian Teacher Magazine
Canadian Jewish Literary Award - Children and Youth Literature   | 2016  |  Winner