The Queen of Paradise's Garden 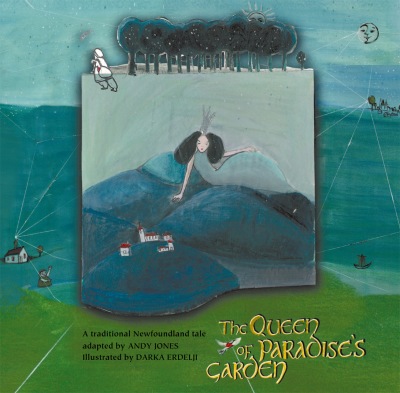 Once upon a time, and a very good time it was, not in your time, indeed not in my time, but in olden times, when quart bottles held half a gallon and houses were papered with pancakes and pigs run about with forks stuck in their backs seeing who wanted a slice o' ham, there were two old people and they never had no children, and they figured they were too old to ever have any.

So begins The Queen of Paradise's Garden, a wonderful adaptation of a traditional Newfoundland tale, and the first in an ongoing series that combines the telling wit and resonant language of acclaimed Newfoundland actor, writer and comedian Andy Jones with the charming illustrations of Slovenian-born puppeteer and artist Darka Erdelji.

Of course, it's clear from the story's beginning that there are children on the way, and one of those children is Jack, the delightful, mischievous, big-hearted hero of so many Newfoundland tales. Told with the humor, warmth and sly wit that have made Jones one of the Island's finest and best-loved storytellers, The Queen of Paradise's Garden follows Jack on his way to the land of the Queen of Paradise, three miles this side of the end of the world, where he searches for a magic fruit to make his parents young again, and finds quite a few other handy things as well.

The story is a free adaptation of a tale told by Albert Heber Keeping of Grand Bank, which he got from Billy Quann of Sagona Island; Keeping's version was published in Herbert Halpert and John Widdowson's seminal collection, Folktales of Newfoundland.

★"Jones's retelling effectively captures the rhythms of oral storytelling and the cadences of Newfoundland dialect. Illustrator Darka Erdelji's illustrations are a fine match. Enchanting, magical, and very skillful, they blend rich, evocative blues, greens, and reds, delicate line drawings in black and white, and rough, folk-art representations of the characters. All in all, a wonderful, rollicking tale."
– Quill & Quire, starred review
"Andy Jones and Darka Erdelji, along with small press publisher Marnie Parsons and designer Veselina Tomova, have created a marvellous book that deserves a place in every school, library and folktale collection. Highly recommended."
– Canadian Review of Materials
"The reteller is writer and actor Andy Jones, a founding member of Newfoundland's CODCO troupe. With this provenance, you might expect something original and quite fine; you won't be disappointed."
– The Globe and Mail
"Andy Jones traditional folk tale opening has its own mischievous twist, 'Once upon a time, and a very good time it was, not in your time, indeed not in my time, but in olden times when quart bottles held half a gallon...,' and we are sitting, poised, at once ready for the obstacles, the awards, the good deeds, indeed for the Queen of Paradise herself. This is traditional storytelling at its best."
– The Deakin Newsletter
The Bruneau Family Award for Children’s/Young Adult Literature   | 2010  |  Short-listed
Newfoundland and Labrador Heritage and History Award   | 2010  |  Short-listed
The White Ravens   | 2010  |  Commended