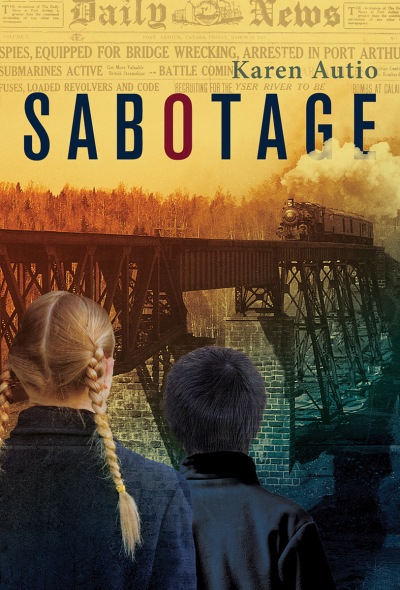 It’s 1915, and the Great War is raging in Europe. What does that have to do with Port Arthur, Ontario? Heaps, thinks John Mäki. Sure, he’s a prankster and likes to have fun. But he’s also a hardworking newsboy with a secret dream to be a reporter. So he keeps his eyes peeled, waiting for the big story. His older sister, Saara, has her own concerns, like her goal of becoming a teacher and people not speaking to her just because she befriends a German girl! She scoffs at John’s suspicions of German spies and blown-up bridges...surely not in northwestern Ontario.

Yet John knows that all of Canada’s grain headed for hungry soldiers in Europe comes through Port Arthur first. A saboteur could do plenty of damage—to the city, the country and even the Mäki family!

Sabotage is the final book in a trilogy about a Finnish family in what was to become Thunder Bay, Ontario. The first two books are Second Watch and Saara’s Passage. Sabotage, told by both Saara and John, takes us into a real-life world of espionage, sabotage and paranoia.
"A rich blend of compelling plot threads, fascinating historical detail, and concepts as relevant in today’s world as they were back in 1915. Highly Recommended."
– CM Magazine
Arthur Ellis Award nominee   | 2014  |  Short-listed