Jack and the Green Man 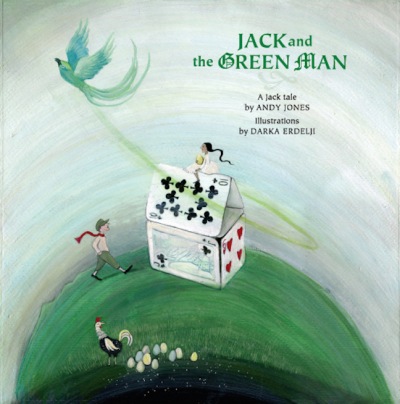 Jack o' Hearts is the top card player in the parish and is feeling pretty sure of himself. When a mysterious green stranger challenges him to a card game with stakes higher than high—well, Jack can't resist. Sure, he's never lost a tournament yet, has he?

Jack is as saucy as saucy can be and he's twice as lucky as that—but the game is trickier than it looks. Luckily, Jack finds he's got an ace up his sleeve: the menacing green man's beautiful daughter Ann. She's got as much magic as her father (or so that enchantment crowd says), and she likes the look of Jack.

This hilarious re-imagining of the traditional Newfoundland tale "The Head Card Player of the World" is jam-packed with magic, romance, transformations, impossible tasks, unforgettable characters, a country tune or two, and the ever-present threat of Jack's head ending up on a spear.

A brilliant and hilarious blending of folklore, high literature and pop culture, Jack and the Green Man is Andy Jones and Darka Erdelji's most ambitious and riotous Jack tale yet. Divided into twelve short chapters, this long-form, gorgeously illustrated storybook will delight readers and listeners of all ages.
Hackmatack Reading Award   | 2018  |  Short-listed
CCBC Best Books for Kids & Teens   | 2018  |  Commended