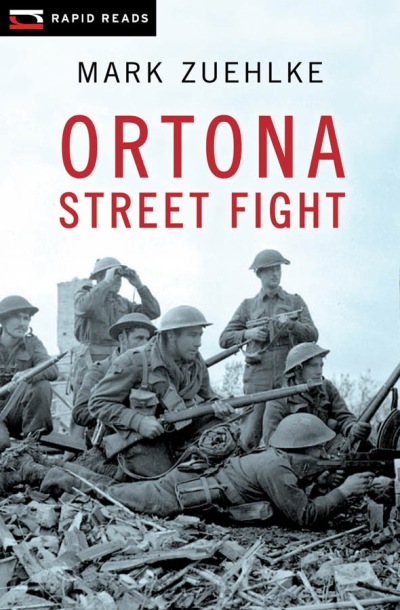 December 20, 1943. Two Canadian infantry battalions and a tank regiment stand poised on the outskirts of a small Italian port town. They expect to take Ortona quickly. But the German 1st Parachute Division has other ideas. For reasons unknown, Hitler has ordered Ortona held to the last man. Houses, churches and other buildings are dynamited, clogging the streets with rubble. Germans with machine guns lie in ambush. Snipers slip from one rooftop to another. The Canadians seem to have walked into a death trap. This is a battle fought at close range, often hand to hand. Casualties on both sides are heavy. In the end, raw courage and ingenuity save the Canadians.

Ortona Street Fight is a riveting telling of what is considered one of the most epic battles that Canadian soldiers have ever fought.
"Gives a realistic account of the battle...It is described as adult nonfiction, but, because of the uncomplicated and straightforward text, it can easily be understood by a much younger audience. There are eight pages of very clear black and white photographs in the centre of the book. They are excellent and help to make the story very real...Recommended."
– CM Magazine
"True to the series' intent, the book is light and fast-paced...Readers new to military history will be genuinely moved by the courage and endurance of the soldiers and will learn about an important chapter in our national heritage...Ortona Street Fight provides a readable, unintimidating introduction to the material."
– Quill & Quire
"Zuehlke has an impressive way with battle descriptions and short, easy-to-understand overviews of military tactics and strategy...A good place to start if you want to learn more about the Second World War in Italy and Canada's contribution to it."
– Alberta Views