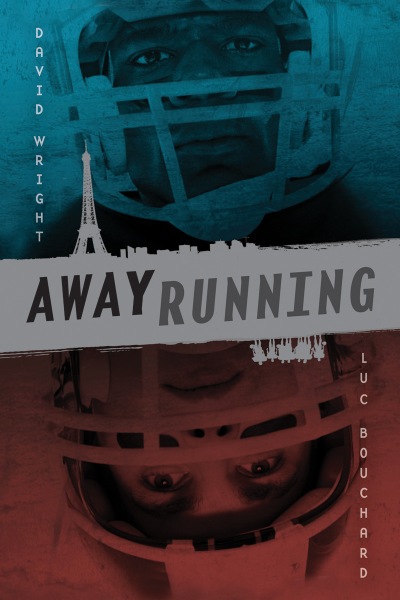 Matt, a white quarterback from Montreal, Quebec, flies to France (without his parents’ permission) to play football and escape family pressure. Freeman, a black football player from San Antonio, Texas, is in Paris on a school trip when he hears about a team playing American football in a rough, low-income suburb called Villeneuve-La-Grande. Matt and Free join the Diables Rouges and make friends with the other players, who come from many different ethnic groups. Racial tension erupts into riots in Villeneuve when some of their Muslim teammates get in trouble with the police, and Matt and Free have to decide whether to get involved and face the very real risk of arrest and violence.
"Authors Wright and journalist Bouchard, who met playing football in Paris and draw on experience for detailed authenticity, pull no punches in addressing racism and social ills, effectively presenting a complicated situation with no simple solution. Once the story catches up with the present tense, tensions brew into irreversible, violent disaster. Timely, nuanced, and highly respectful of readers' intelligence."
– Kirkus Reviews
" Away Running is a richly complex mix of personal growth against a backdrop of social upheaval. Read it. Remember it. Recommend it."
– Raymond Obstfeld, co-author with Kareem Abdul-Jabbar of the Street Ball Crew middle-grade book series
"This is an important book. With characters we immediately care about, spot on dialogue, and a fast moving, football filled plot, Away Running takes readers into the very heart of racial and cultural prejudice. Inspired by true events in Paris in 2005, the novel builds to a crescendo that will take your breath away. Wright and Bouchard have molded a story that confronts some of our most pressing social ills, and offers a thread of hope."
– Elisa Carbone, award-winning author of Jump
"Action-packed...Introspective yet fast moving, this...offering gives teens plenty to ponder."
– Booklist
"Demands not only that readers consider issues of privilege and race, but also that they understand how deeply embedded our cultural ethos lies, and how complicated intercultural and interracial interactions really are...Away Running is a book about football...But it is far more than that: at its heart, it is a book about what it means to be human, regardless of class, race, or ethnicity."
– Resource Links
"The novel provides readers with a unique viewpoint...Character development possesses the potential to connect with male readers, especially athletes...Educators and librarians seeking sports books to engage specific readers may consider adding this novel to their shelves."
– VOYA Magazine
"Honest, amusing banter dances around the tensions between classes, religions, and races in a rich blend of slang and colloquialisms that render the teammates sympathetic and realistic...The authors, who draw on true events and their own experiences playing football overseas, address complex situations and social tensions in a manner that is true-to-life and potent."
– Quill & Quire
"Away Running exceeded my expectations by bringing to life a diverse cast of characters living through real life situations I never would have anticipated based on the books description. When I first started reading Away Running and realized it had two points of view I was a little upset, but the authors pulled off the different views very well and made it easy and understandable reading for both. I found the diversity, of not only the two main characters but of the entire cast, fantastic and very well put together. If you enjoy American Football and diverse characters, with well written plot twists I would suggest you pick up a copy of Away Running as soon as it is released."
– Library Thing Early Reviewers review
"This book has fire behind the words that sneak up and burn you down when you least expect it...Orca publishing has a winner on its hands, it should be celebrated and talked of in a way that makes a reader want to steal the story and call it their own."
– Huffpost Books
"Plenty of appeal...punchy dialogue and timely subject matter, this is one that even football neophytes will find captivating."
– The Globe and Mail
"Does a very realistic job of portraying the two youths...every group is represented with complexity...Highly recommended."
– School Library Connection
"An impactful story about courage and the importance of learning to take a stand and do what is right."
– Mark Weightman, President and CEO of the Montreal Alouettes (CFL)
"Away Running is highly readable and well written...The two boys and their new friends switch between French and English from France, Quebec, and America...It's deftly executed without being repetitive and adds another layer to their youthful banter. Each sorrow in the book&#8212a casual racist act, an imperfect reaction to it, the sudden loss of a loved one, deep-rooted injustice—is so well crafted it will bring a more sensitive reader, ahem, to tears."
– Montreal Review of Books
USBBY Outstanding International Books   | 2017  |  Winner
Best Books for Kids & Teens   | 2016  |  Commended
Junior Library Guild Selection   | 2017  |  Commended